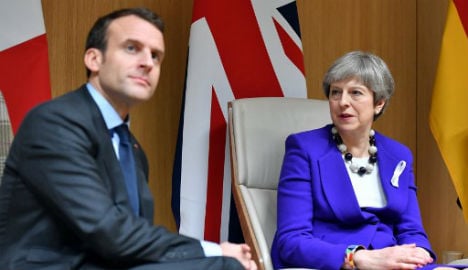 French President Emmanuel Macron and UK PM Theresa May at the European Union leaders summit in Brussels on March 22, 2018. Photo: Geert Vanden Wijngaert / POOL / AFP
“On the 21st anniversary of the Chemical Weapons Convention, and following Douma and Salisbury, Theresa May and I call with one voice for the world to  join us in upholding the vital global prohibition on chemical weapons use,”  Macron tweeted in English and French, referring to recent chemical attacks in Syria and Britain.

On the 21st anniversary of the Chemical Weapons Convention, and following Douma and Salisbury, @Theresa_May and I call with one voice for the world to join us in upholding the vital global prohibition on chemical weapons use.

May's office tweeted a similar statement, also in both languages, saying “we should never go back” on ending the production, stockpiling and use “of these terrible weapons.”

21 years ago, the Chemical Weapons Convention banned the use and development, production and stockpiling of these terrible weapons. @EmmanuelMacron and I today restate our commitment to that agreement, calling on other nations to join our firm position: we should never go back. pic.twitter.com/85kf8LL1C5

Chemical weapons, such as mustard gas, were first used on the battlefields of World War I and also in 1988 by late Iraqi dictator Saddam Hussein against civilians in Halabja, Iraq. The Chemical Weapons Convention (CWC) convention, which oversees the destruction of such arms, came into effect on April 29, 1997.
Macron's and May's statements came two weeks after the United States, France and Britain carried out missile strikes against Syrian President Bashar al-Assad's regime over its suspected use of chemicals in an attack near  Damascus on April 7 in which over 40 people died.
Inspectors from the Organisation for the Prohibition of Chemical Weapons, which oversees the application of the 1997 convention, are currently in Syria to probe the assault, which Syria and Russia say was staged.
Russia has also denied accusations that it used a Soviet-made nerve agent to poison a former former double agent Sergei Skripal and his daughter Yulia in the English city of Salisbury on March 4.
Western countries expelled scores of Russian diplomats over the attack.