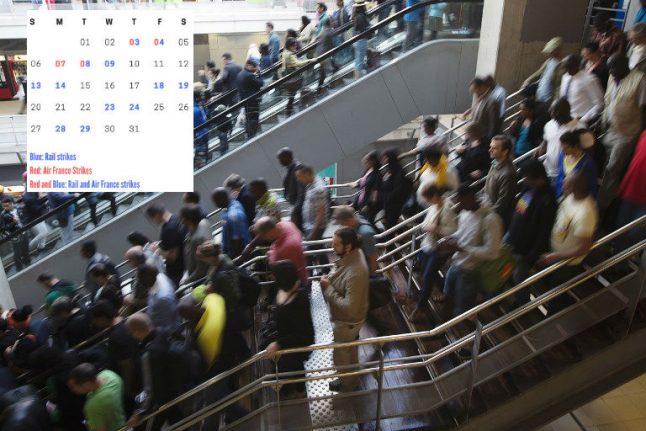 If you are coming to France in the next few days and months or you just live here and rely on train travel then there are quite a few dates to get in your diary. (SEE full calendar below.)

Rail workers have long since made their intentions clear to hold a series of two-day rolling strikes until April 28th.

The first of these two-day strikes was held on Tuesday April 3rd and Wednesday April 4th and rail users were given a sign of what they can expect over the coming weeks with services severely disrupted.

Rail workers believe the tactic of striking for two days, then returning to work for three days, before another two day strike will maximize the disruption to the rail network whilst not hitting them as hard in the pocket as a continuous rolling strike.

The dates below in blue show when the rail strikes are due to take place. Unions have vowed they will go ahead unless the government backs down on its reform plans. Both sides seem determined to fight their corner so it looks unlikely a compromise will be reached that will see the strikes called off.

Air France workers, including pilots, cabin crews and ground staff, have also been getting in on the action too.

They have been holding a number of one-day strikes since February but have now decided to tighten the screw on company chiefs by announcing four new dates. Significantly they coincide with the rail workers strike as unions for the airline's workers, who are fighting for a 5.1 percent pay increase across the board in 2018.

They might not have any more strikes planned for April but this week they announced four new strike days for May.

The dates in the calendar with a red mark are when Air France staff are due to strike. On previous strike days around a quarter of flights have been cancelled to and from airports all over France.

With Air France bosses insisting the company will only offer a 2 percent pay rise to staff a compromise that would see the industrial action called off does not seem likely either.

In which case anyone relying on plane or train travel over the next few months might want to make alternative plans. CLICK HERE If you need information on what to do if you need to cancel your tickets.