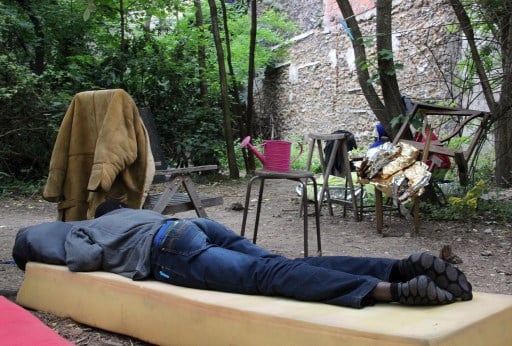 Elected representatives of French communist parties PCF and the Left Front proposed on Thursday that the matter be discussed at the Paris Council, a month after the closure of the city’s oversaturated Porte de la Chapelle migrant centre (pictured below).

They’re suggesting the 1,500 evacuated migrants, who are currently being housed in a makeshift camp at Porte de la Villette, be soon rehoused in a much more central and desirable part of the city: Bois de Boulogne park in the 16th arrondissement.

The group has admitted the proposal is a political move aimed at rebalancing the discrepancy in welcome centres between East and West Paris, but they also argue their request is a practical one. “There’s an unused reception area at the Bois de Boulogne park (pictured in tweet below), it could be transformed into a camp without any hassle,” PCF-Left Front advisor Jean-Noël Aqua told TV news channel BFMTV, adding that there was already running water and electricity.

“We want this park to host a migrant centre as soon as possible. (The west of Paris) must also contribute to the effort of welcoming migrants to the city”.

That’s not a view shared by all residents in the 16th arrondissement, however.

“We already have prostitutes, we can’t walk in the park after 6 pm,” an unnamed resident told BFMTV.

“If they bring in migrants, where are we going to walk in Paris? As someone who’s lived here for years, I refuse for this to happen.”

Another passerby gave the channel a more pragmatic view, arguing that “there aren't many free spaces in Paris aside from this park and Bois de Vincennes. We must welcome these people.”

It remains to be seen whether the Paris Council will vote in favour of the proposal next week, but city mayor Anne Hidalgo has already hinted that she wants Bois de Boulogne park to act as an “alternative” to other poorly connected and serviced camps on the outskirts of Paris.

The news comes just a day after a newly proposed ‘battle plan’ to help France’s poorest and high-immigration suburbs was presented to the French government. Commissioned by Napoleon himself, it’s home to stylish botanical and landscape gardens, hosts concerts and marathons on weekends and has the ultra-modern Louis Vuitton Foundation art museum in its grounds.

It has however become a hotspot for prostitution in the city at nightfall.

The neighbourhood in which it lies, the 16th arrondissement, is perhaps the city’s most upmarket, considered to be the French Kensington or Chelsea, a haven for Parisian high society.

It’s also home to PSG’s Parc de Prince football stadium, some of the city’s most emblematic museums and the Roland Garros tennis stadium.