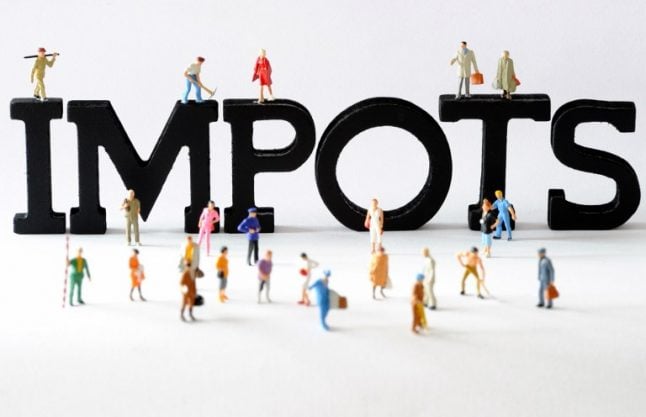 Photo: AFP
The deadline for the tax declaration (La Déclaration des Revenus) is upon us, with Thursday May 17th marking the day when all paper applications must be submitted, although those who file them online have an extension depending on where they live.
While some of you will already have filed your tax return, others will no doubt be procrastinating in order to put off yet another French bureaucratic challenge.
And that's understandable — tax season can be particularly daunting if you're new to France.
When it comes to making the declaration there are certain things you need to remember. Some may seem obvious, but many are forgotten and may lead to problems further down the line.
We spoke to Simon Smith, head of tax at French law firm Triplet et Associés to get some tips on how to make French tax season as hassle free as possible.
You might not have to declare at all
Firstly, there might be good news for some of you… You might actually not have to declare tax this year at all.
That's because if you arrived after January 2018, you won't be included in the previous tax year in France, where taxes are calculated according to the calendar year.
Photo: stokkete/Depositphotos
First timers have to declare on paper
For those of you paying taxes in France for the first time, you'll have to declare on paper.
While this might sound like a hassle, you'll only have to do this the first time. Next year, when you're in the system, you'll be able to do it all online.
Declaring online
The website allows you to calculate exactly how much you'll have to pay (or how much you'll get back) immediately, rather than having to wait for months to find out.
France's 101 départements have been divided into three groups, to ease congestion and the risk of crashes on the official government website – which tends to happen when deadline day approaches.
If you're going to leave it to the last minute, the internet declaration deadlines, which depend on which region of France you are in, are as follows:
Départements 0-19 – May 22nd
Départements 20-49 – May 29th
Départements 50 plus – June 5th
Declare your foreign bank accounts
One of the things that expats in France have to do, but often forget, is to own up to any foreign bank accounts.
“This is a way for the tax office to have an idea of what your financial situation is in general, not just in France,” French tax lawyer Simon Smith tells The Local, and it can be done on a separate piece of paper.
So, if you have bank accounts and/or ISAs back in the UK, for example, you are expected to include evidence of the interest you earned on these accounts, but thanks to an agreement between France and the UK, you won't have to pay taxes on the interest if you already have in the UK. Photo: AFP
Ask for help
The thought of visiting a French bureaucrat in person to get help on filling in your tax form might fill many with dread but it's likely to be worthwhile.
For a start if you are filling in your first tax declaration then you'll need to go down to your local tax office anyway to pick up the correct forms and while you are down there it's a good idea to join the queue and get some help from a member of staff if you are unsure.
“They are very helpful and will tell you what you need to know,” Smith says, although he added that while they will try to help they might not speak fluent English.
So, if you're worried about understanding them properly, you might want to consider paying an advisor for the first year.
By doing it with someone who hopefully knows what they are doing, the next one will you fill in should be a lot easier.
You could also check with your local Town Hall which sometimes invite French tax lawyers and accountants to give advice to people on their tax returns.
Visit the English page of the tax authority's website
If you're starting from scratch, visit the English page of the tax section of the French government's website, Smith advises.
This can be found HERE. Photo: ginasanders/Depositphotos
Forms
The 2042 form is the main one but there are others that you might need to fill in depending on your situation.
Whilst the Déclaration des Revenus comprises a variety of forms, according to circumstances, here are some of the main forms that apply to expatriates. You'll also be able to download forms from www.impots.gouv.fr.
Others include the 2042C, an additional form which is required if you have received income from furnished letting or chambres d'hôtes, or where you have paid tax in the UK that needs to be offset against French tax, and the 3916, a form which covers details of any bank accounts located outside of France.
There's also the 2047, a form for any income received outside of France. Foreign income must be declared on this form, as well as on Form 2042.
Tax deductibles
There are some professionals, including journalists, who receive tax breaks from the French government.
“There are many professions which have their own place within the French tax system,” Smith said. “When you file your taxes for the first time it's important to check whether yours is one of them.”
The French can also claim tax breaks for house improvements, child care and gifting so it's worth asking if you think you might be able to benefit.
Taxed as a household
Whereas in the UK you pay tax as an individual, in France you are taxed by household. So if you are a married couple or if you are “pacsed” (in a civil partnership) then you should make one joint declaration rather than two. If you got married halfway through the year you can now declare one common declaration (instead of three, which was previously the case) for the whole year.
And if you have any children living with you that are earning then you'll need to declare their earnings too…and that includes any summer jobs.
Things will change
There will be more changes (and hopefully fewer headaches) when it comes to paying taxes in the future, with income taxes to be deducted at source from January 1st 2019.
That means workers will see the taxes deducted straight out of their wages at the end of each month in real time, similar to the Pay As You Earn system in the UK.
It's probably worth noting, however, that we've been promised this before.