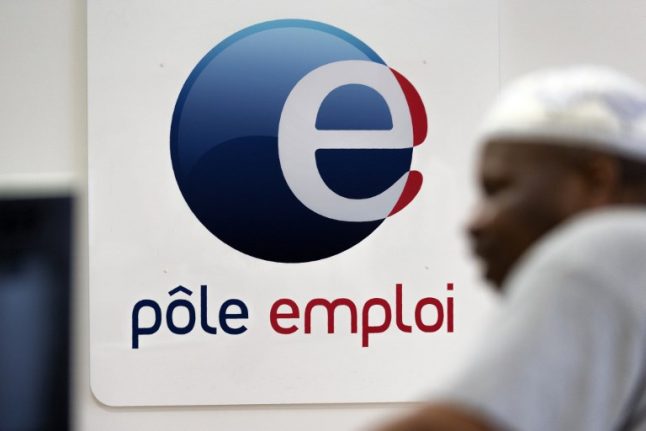 Photo: AFP
The official name in France for unemployment benefits is allocation d’aide au retour à l’emploi (ARE) although you're much more likely to hear it called chômage.
And while it's undoubtedly a good payment system, there are quite a few conditions you need to meet before you can access it. These broadly cover how long you've worked in France, how much you've been earning and why you're out of work.
Let's start with what you have to contribute before you head down to sign up at the local PôleEmploi (job centre).
As with other types of benefits in France, for non-Europeans access to them depends on your legal status but anyone with working and residency permits (Carte de sejour) can access benefits in the same way as French residents.
However, only people who have been working and therefore have paid a compulsory social security contribution are entitled to unemployment benefit in France.
Employees in France pay 2.4 percent a month to URSSAF which is responsible for collecting employer and employee social security contributions.
But how long do you have to have been working for?
Here's the key, to claim unemployment benefit in France you need to have been making payments to URSSAF for at least 122 days in the last 28 months (last 36 months if you are over 50) and be younger than the minimum retirement age which in France is 62. Photo: AFP
Don't quit on bad terms
But even if you've been paying your contributions for that time, it doesn't necessarily mean you'll have access to unemployment benefit.
You also need to meet several other conditions, one of which is that you need to have lost your job without meaning to.
That usually means that your employer has ended your work contract, you've come to the end of a fixed-term employment contract, the contract has been ended by mutual agreement or you've resigned for a valid reason.
It might sound obvious to avoid being sacked but in the case you are fired from a job in France, make sure you don’t have “faute lourde” written anywhere on your severance contract. This basically translates as “gross negligence” and will prevent you from receiving any kind of benefits. So try not to commit industrial espionage or any other kind of crime at work.
You must also be registered as a jobseeker with “Pôle Emploi” — the agency responsible for unemployment benefits — and be looking for work.
On top of that, as a foreigner in France, you'll need your visa to be intact. You need your visa as much to be out of work as you do to have a job, otherwise you won’t receive any benefits.
And obviously the payments vary, with the daily return-to-work allowance calculated according to the daily reference wage (SJR). Find out more about how that's calculated HERE.
This is based on earnings according to the contributions you made during the year before you left your job.
For example if you earned €20,000 during the previous 12 months, then the SJR would be €20,000/365 days = €55 per day.
According to the 2017 rules, you would then be given either 40.4% SJR + €11.84 per day (2017), or 57 percent, depending on which calculation produced the larger amount. Photo: AFP
“Unemployment payments are very good in France,” relocation expert Tracy Leonetti told The Local, although she added that it's important to take into account the fact that the Pôle Emploi often isn't that good at helping people from the US and UK find a new job.
That's because people who have moved to France from these countries for work tend to be very experienced, sometimes even working at an executive level which isn't what the Pôle Emploi specialises in.
“On the other hand, they will send you on courses in French so it can be a good chance to improve your language skills,” she said.
If no chômage, all is not lost
Many people might be under the impression that it's the chômage or nothing in France but there are other sources of state benefits that you might be eligible for.
Firstly, there is the 'Allocation de solidarité spécifique' (ASS) which has certain conditions applied to it, including one which states you must have worked at least five years out of the last ten, be fit enough to work and you must not be in a position to claim the chômage. For more information on the ASS CLICK HERE.
There is also the Revenu de solidarité active (RSA), another social welfare measure aimed at helping those on low wages and is also only applicable in certain cases. The RSA can pay up to around €600 a month. For more information on the RSA CLICK HERE.
Help for start-ups
The Pole Emploi isn't just for people who are looking for a new job, it can also help those who are looking to take a pop at starting their own business.
The scheme has the acronym ACCRE (aide aux demandeurs d’emploi créant ou reprenant une entreprise) and not only will they help you get some kind of management and business training but they will also be flexible in how they pay you your benefits.
And perks for those wanting to start their own business could be about to get even better, with French President Emmanuel Macron's government set to bring in a raft of new changes to the system.
One of the changes could be that employees who choose to resign can qualify for chomage which would mean they wouldn't have to have their current contract severed in order to get started.
Another change the government wants to bring in is a “safety net” for the self-employed, who aren't covered for sick pay or unemployment at the moment.
But for now, watch this space.
READ ALSO: The jobs in France where you don't really need to speak French