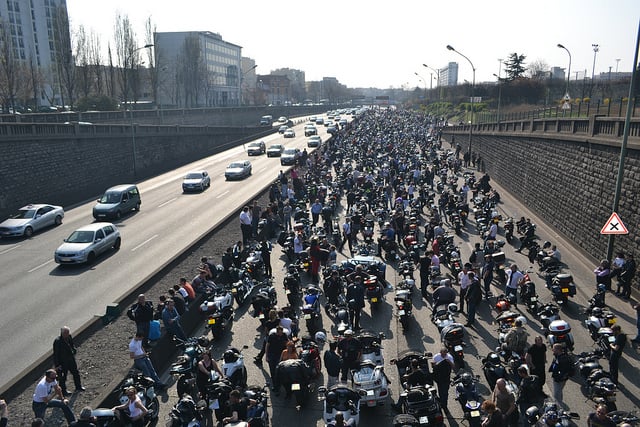 With multiple lanes looping 35 km around Paris, the Périphérique (French for ring-road) should be the easiest way to get from one side of the French capital to the other. Shouldn't it?

In reality, mass disruption, pollution and a divide between the city centre and its suburbs make the Périphérique a headache for motorists, nearby residents, and city planners.

Here are the five worst things about it.

A map of the ringroad, showing all the “portes” or underpasses. Photo: Gregory Deryckère/WikiCommons

1. It has unhealthy levels of pollution

Those who live near the Périphérique – or indeed who drive along it – are exposed to high levels of pollution from the constant flow of traffic.

The group “Respire le Périph” is urging residents who live near the ring road to sign a petition to push MPs to do more to protect those breathing in the polluted air every day, especially young children, the elderly and pregnant women.

Paris is officially the most congested city in France, with Paris drivers spending an average of 45 hours per year stuck in traffic jams in 2016 according to a study by Inrix.

With breakdowns, accidents, construction work on new transport links, and regular closures at different access points, you can bet that a lot of those hours have been spent on the Périphérique.

READ ALSO: And the worst French city for traffic jams is… 3. Mass protests can cause days of chaos

When the French protest, they don't do it by halves. In recent years protesters have caught on that one of the most effective ways to get people's attention is to cause mass disruption to traffic on the Périphérique.

In 2016, thousands of taxi drivers barricaded the carriageway and torched car tyres to protest the competition from car-share app Uber.

The same year, nearly a thousand firemen protested against the state, blocking the road and lighting flares, while the following month saw a 4km convoy of 300 tourist coaches drive at a snail’s pace to protest Parisian parking tariffs. Except around the Porte de Gentilly, in southern Paris, there is no emergency lane on the Périphérique.

This leaves motorists with little place to go should they break down or even crash, causing major disruptions.

And if the emergency services need to get to you on the Périphérique, well they've got to fight their way through the traffic along with the rest of the drivers. 5. Its ugliness is holding Paris back

Paris is one of the most beautiful cities in the world, but the Périphérique’s tall concrete overpasses really is an eyesore on the landscape.

This is becoming a costly problem for the city’s regional council as it seeks to modernize and expand the centre of Paris into its surrounding suburbs.

Projects to cover parts of the carriageway with gardens and shops – like in Porte de Lilas – take a lot of time and money to complete; so don’t expect Paris’s ugliest boulevard to disappear anytime soon. This story has been updated since it was first published in February 2017.