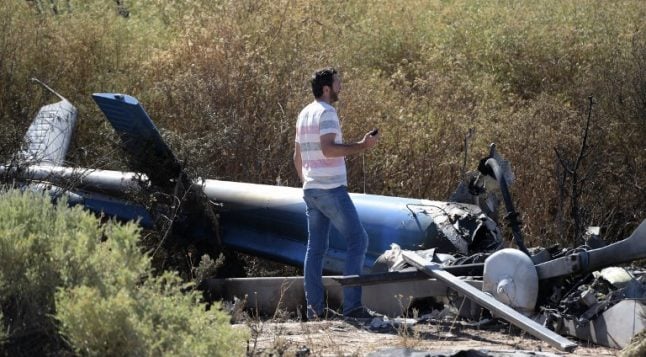 Photo: AFP
Ten people were killed when the two helicopters collided on March 9, 2015, during filming for the French television series “Dropped”.
Renowned yachtswoman Florence Arthaud, Olympic champion swimmer Camille Muffat, Olympic boxer Alexis Vastine were among the victims.
The family of cameraman Laurent Sbasnik, who was among the five French crew members killed, sued the production company SAS Adventure Line Productions for negligence.
In a ruling dated April 20 a labour tribunal near Paris sided with the family, declaring that his death was the result of an “unforgivable mistake” on the part of the producers.
It said that the conditions in which Sbasnik was filming — through the open door of the helicopter, wearing a harness, as the aircraft flew close to another Eurocopter  — entailed “particular risks for his health and safety” for which he had not received appropriate training.
The court ordered the company to pay €120,000 ($146,000) in compensation to Sbasnik's widow, mother and two children and to reimburse nearly €400,000 paid out by the French state to the family.
In 2015, an investigation in Argentina concluded that the crash was caused by errors on the part of the two Argentine pilots, who died in the accident.
“Dropped,” which was to air on French channel TF1 but was immediately cancelled, featured sports stars taken blindfolded into rugged environments and given 72 hours to get to a place where they could charge a cell phone.
Arthaud, 57, was considered one of the best sailors in the world, conquering what had been a male-dominated sport.
Muffat, 25, won three medals at the 2012 London Olympics, including gold in the 400-meter freestyle. Vastine, 28, won bronze at the Beijing Olympics in 2008.