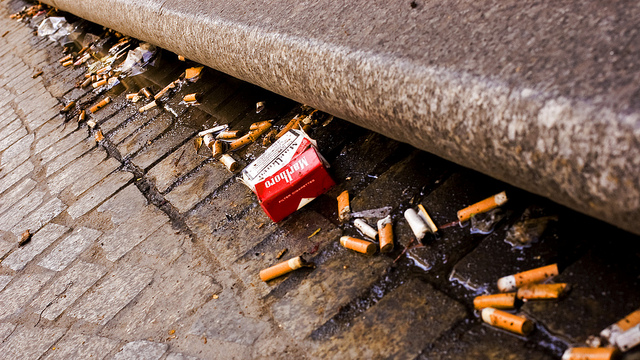 Photo: Tavallai/Flickr
Every year in France, 30 billion cigarette butts are thrown on the ground.
This fact is even more shocking when you find out that they will take 15 years to deteriorate.
The government's new “anti-waste” plan, announced on Monday, includes 50 measures to clean up the country's streets.
And on the list is the plan to convince tobacco manufacturers to launch a recycling system and participate financially in the collection operations themselves.
“Collecting cigarette butts is very expensive for cities,” a government spokesperson told the French press.
In total, 350 tonnes of mégots, as they are known in French, are collected each year in Paris alone.
As a result, the government suggests that tobacco companies increase the price of a packet of cigarettes by a few centimes as part of an “eco-participation” scheme, something which already exists on other products, such as furniture, appliances and electronics in France. But that means they need to convince tobacco giants to charge customers more for their packet of cigarettes.
And at a time when the government is raising cigarette prices to €10 to cut down on the unhealthy habit, unsurprisingly it doesn't look like the industry will be easy to win round.
“We understand the concern of the public authorities but the source of the problem is the lack of civic behaviour of some consumers who throw chewing gum, cans or cigarette butts when they have available means not to pollute via different solutions such as disposable ashtrays and bins equipped with snuffers,” Eric Sensi-Minautier, Communication head at British American Tobacco Europe West told Le Parisien.
“Under the pretext of the environment, this is actually a new tobacco tax. Making consumers pay for the bad behaviour of a few is not the answer,” he added.
So what happens to the cigarette butts now?
Well, without a recycling plan in place, there's no option but to incinerate them.
And it's French company Chimirec, which specialises in the collection of hazardous industrial waste, which is currently responsible for gathering the butts from the collection points around the Paris business district of La Defense.
“For now, they end up in incineration because the volumes we collect are too low and it is not profitable enough to create a sector dedicated to their recycling,” Chimirec's sales director Stéphane Debicki told Le Parisien.
Fines
In 2015, the fine for tossing a cigarette butt on the streets of Paris was raised to €68.
“These fines aim to give Parisians and visitors a sense of responsibility so that they also become actors in keeping the city clean,” said Paris Town Hall's cleanliness tsar Mao Peninou at the time.
The problem of cigarette butts was made considerably worse ever since a smoking ban in public places was introduced back in 2008, forcing many more people to begin puffing outdoors.