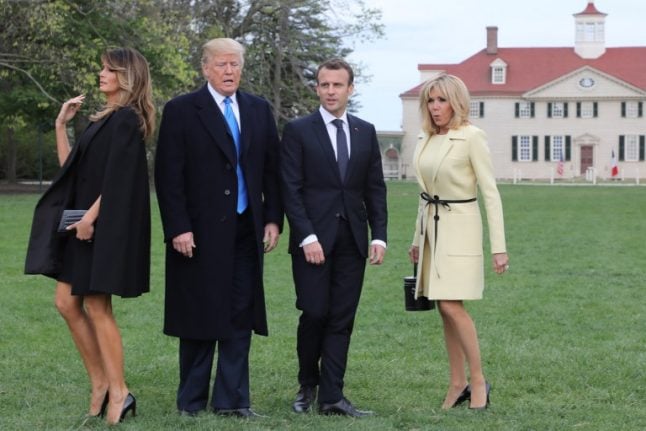 First, the internet had a field day when the Trumps and the Macrons had a photo shoot in the gardens of the Mount Vernon mansion.

This photo looks like a promotional still for a movie called 'mon frère adoptif est un idiot' where two brothers who have never met go to their mother's funeral and everything goes horribly wrong. pic.twitter.com/GIdb2JA2xr

And when they planted an oak tree, a gift from Macron, the internet didn't hold back either.

not a fan of the new Wes Anderson movie pic.twitter.com/yFTTrxev6Q

There were also a fair few tweets commenting on Macron's unusual hand gestures during this photo shoot:

#QAnon
WTF?
Macron flashes devils horns behind Trump…
Is he a Satanist? pic.twitter.com/p43Qs9Nl7q

And let's not forget Dandruff-Gate, when Trump wiped some apparent dandruff from Macron's shoulder. “When the aging gorilla is confronted with the much more virile, new alpha-male, he shows submissiveness by grooming the alpha-male, but the gesture is actually a vain attempt by the old gorilla to humiliate his much younger rival.”

Meanwhile, people were playing close attention to the affection between Macron and and his wife….

And comparing it to the relationship between Trump and his wife

She REALLY didn’t want to hold his hand… pic.twitter.com/CWUeDlN6RE

But this was nothing compared to the attention to what people are calling Le Bromance, or, the relationship between Macron and Trump.

I don’t know how I feel about the Trump/Macron bromance honestly pic.twitter.com/lN0pLy5Utj

Donald Trump is getting a lot more love from Emmanuel Macron than Melania. #9News https://t.co/nz1cgUwXrA pic.twitter.com/ifsQKmigDD