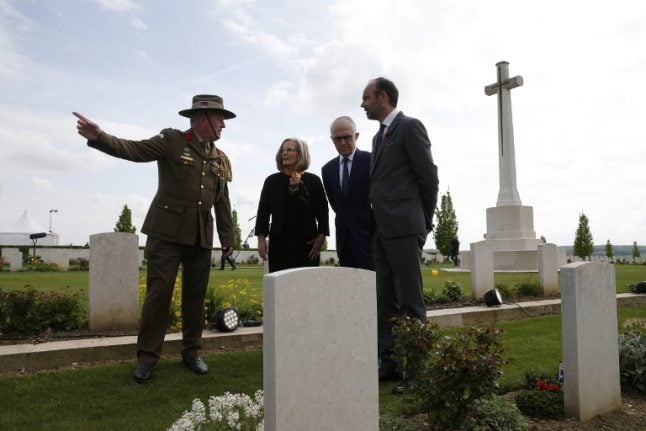 Some 8,000 Australians made the round-the-world trip to mark a special centenary Anzac Day, Australia's national day of remembrance on the Somme, scene of some of the most brutal battles of the 1914-18 conflict.

Tony McNiff said it was “spine tingling and extremely emotional” to have made it to the Australian National Memorial, just outside the town of Villers-Bretonneux, the site of a major victory for Australian troops in 1918.

“We're really among the privileged few to be among the 8,000 here,” McNiff, who served 35 years in the Australian air force, told AFP.

Of the 295,000 Australians who came to fight on the Western Front, some 46,000 died — huge losses for the young nation, where the sacrifice remains deeply ingrained in the national identity.

Australian Prime Minister Malcolm Turnbull, his French counterpart Edouard Philippe and Britain's Prince Charles all paid tribute at the ceremony to the young men who volunteered for a war on the other side of the globe.

“The deeds of these young men have echoed down the years,” Turnbull told the crowd, who huddled in the grey dawn as the Last Post bugle call rang out from the memorial's tower.

Like Turnbull, he paid tribute to his country's forces serving around the world in current conflicts, from Syria to anti-jihadist troops in west Africa.

Prince Charles said the “costly sacrifice” of the Australian troops — who had an average age of just 23 — would “forever be part of Australia's identity”.

Dawn at Wednesday also marked 100 years to the day since Australian troops'  breakthrough in Villers-Bretonneux, when they pulled off a major counter-offensive against German troops alongside British and French forces.

The audacious operation stopped a German advance that would have otherwise swept on to nearby Amiens, a strategic city for allied forces.

Monique and Yves Degremont, a retired couple from the northern city of Lille among the few French nationals in the crowd, said they had wanted to give thanks to Australian troops.

“If the Australians hadn't been there, things might have been different,” Monique said.

Turnbull and Philippe had on Tuesday opened a high-tech new museum at the Australian memorial designed to bring to life the country's role on the Western Front.

The 63-million-euro ($76-million) Sir John Monash Centre, named after one of the country's greatest generals, uses life-size videos of soldiers and a 360-degree cinema to showcase the role of Australian troops.

It showcases Australian soldiers' diaries, photographs and letters, while visitors can also visit a stretch of rebuilt wartime trench to better understand life at the Front.

The memorial site where it is located is also home to a cemetery where 2,000 Commonwealth troops are buried.

The names of some 11,000 Australian troops, whose bodies were never found, are engraved on its walls.