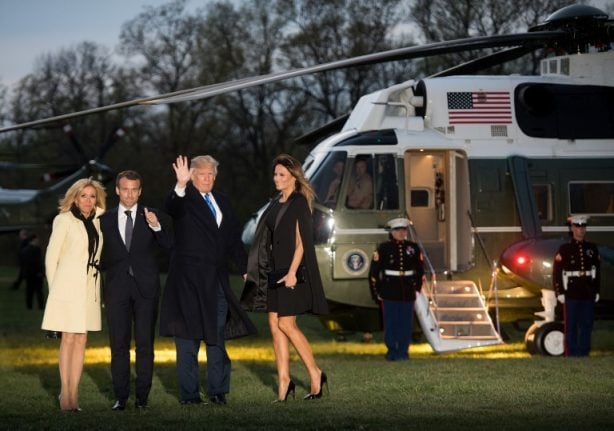 Photo: AFP
Donald Trump's answer to a lavish Eiffel Tower dinner last summer at the invitation of Emmanuel Macron, Monday's theatricality set the stage for the US president's first state dinner — as well as two days of talks over hot-button issues including the Iran nuclear accord.
The Macrons joined the Trumps for the outing to the Mount Vernon estate after the French president and his wife Brigitte visited the White House, where the world leaders appeared jovial despite differing on myriad issues in recent months.
Wielding golden shovels, the leaders together planted an oak sapling from Macron as a testament of Franco-American friendship.
Later in the evening the foursome boarded the US leader's Marine One helicopter that whisked them to Mount Vernon for a private dinner.
Upon arriving, the Trumps and Macrons posed for a brief photo-op before golf carts chauffeured them to Washington's historic plantation mansion.
A single photo of the manor's interior, released by France's Elysee, showed the two presidents speaking in front of a small table decorated with roses.
Brigitte Macron donned a daffodil tailored shift dress and jacket ensemble that contrasted sharply with a black waist tie and high heels. Those shoes' vertiginous height was slightly outdone by the even taller pair of Louboutins that Melania Trump wore along with a little black dress and matching tuxedo-style cape, her long nails painted white.
Both world leaders sported dark suits, Macron wearing a dark gray tie and Trump's in bright blue.
Following the two-hour meal the couples reboarded the roaring helicopter to embark on the rest of the three-date state visit, which will include weighty diplomatic talks and a much-anticipated state dinner Tuesday evening.
The menu for that dinner, with more than 100 guests expected, will include rack of lamb and New Orleans-style jambalaya.
The White House said the color scheme for the dinner is cream and gold and food will be served on china from the presidencies of Bill Clinton and George W. Bush.
The Cross Hall of the White House will be decorated with more than 1,200 cherry blossom branches, while the dining room will feature white sweet peas and white lilacs.
Entertainment for the glitzy affair will be provided by the Washington National Opera.