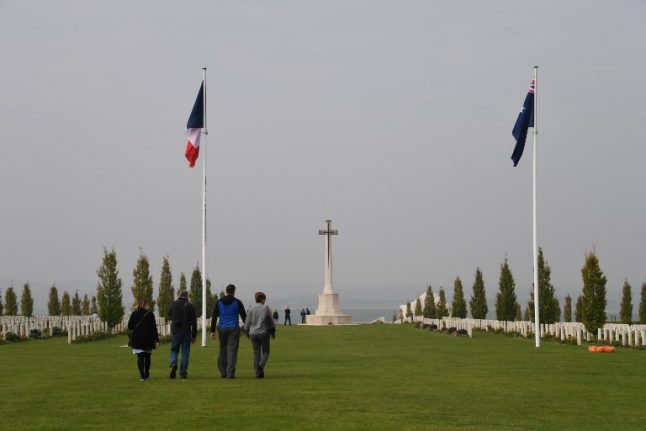 Turnbull and his French counterpart Edouard Philippe were set to inaugurate a new 63 million euro ($76 million) museum commemorating the 295,000 Australian soldiers who came to fight alongside Allied forces on the Western Front.

The Sir John Monash Centre in the Somme region, which became synonymous with slaughter during the 1914-18 war, uses life-size videos of soldiers and a 360-degree cinema to showcase the role of Australian troops.

“Lord of the Rings” director Peter Jackson advised on the filming of scenes for the museum's video displays, which were shot in Australia, France and New Zealand to bring the experience of trench warfare to life.

“I just came to pay my respects for the lads who gave their lives and the families who gave their sons,” Helen Leake, who travelled from Melbourne in honour of her father's cousin, told AFP in Villers-Bretonneux on Tuesday.

Greg Henderson, a salesman from Brisbane, came to honour his great-grandfather Charles Joseph Mackie, who died at nearby Proyart.

“You walk through the graveyards and see that they're 19, they're 20. It breaks your heart to see it,” he told AFP.

Some 8,000 soldiers' descendants and other mourners were arriving Tuesday to remember the dead ahead of a ceremony at dawn on Wednesday to mark Anzac Day, Australia's national day of remembrance.

Turnbull, Philippe and Britain's Prince Charles will all speak at the dawn ceremony.

The official opening of the museum, on the site of the Australian National Memorial where more than 2,000 soldiers are buried, comes 100 years to the day since the Battle of nearby Villers-Bretonneux.

German troops seized the village on April 24, 1918, on a major westward push towards the end of the war.

But Australian and British troops, backed by French forces, launched a counter-offensive, stopping the German advance towards the highly strategic nearby city of Amiens.

Over the course of the war, some 46,000 Australian troops died and more than 130,000 were injured — huge losses for a nation whose population was only five million at the time.

Only one identified body was ever repatriated to Australia.

Remembering beyond the centenary

Yves Tate, the 84-year-old who runs the small Franco-Australian Museum in Villers-Bretonneux, said it was moving to see Australians still visiting the town of 4,000 people a century on.

“We're seeing the arrival of a fourth generation of soldiers' descendants who understand the duty to remember,” he said.

“What's essential for us is that this continues after the centenary, this welcoming of the Australians, and the relationship between the two countries.”

The new history museum, which opened to the public earlier this month, is named after Australian general John Monash.

Along with hundreds of screens projecting archive footage, it will display soldiers' diaries, photographs and letters, while visitors will be able to enter a recreation of the trenches.

“Lord of the Rings” director Jackson also lent the museum two World War I planes from his personal collection for the films, which took more than a year to produce.