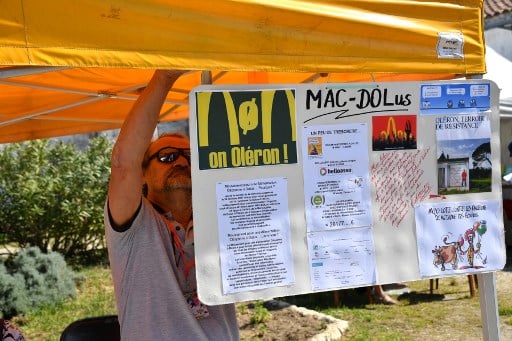 By all accounts, Gregory Gendre is not exactly a fan of “Le Big Mac”. Since 2014, this Green Party mayor has thrice blocked the arrival of the fast-food chain to the shores of Dolus-d’Oléron, the island town he presides over.

He has the support of some of Dolus’s 3,200-strong population, and that may be largely down to the food alternative he’s offering. Gendre, along with 200 volunteers, has just transformed an old farm into a sustainable food zone dubbed “McDolus”, which daringly combines the name of the American fast-food giant with that of the town.

But the name is pretty much where the resemblance stops. Organizers are calling McDolus an “open-air laboratory” which holds food workshops and tastings.

As technical as that may sound, their version of a 'big mac meal' includes organic oysters, eel with parsley and local wines.

A tad more refined than “le Royal with Cheese” perhaps.

“With Mcdonald’s looming, we didn’t want to stay on the defensive, we wanted to create an alternative,” Gendre, who set up a company that recycles cooking oils, told regional daily La Voix du Nord.

According to the 39-year-old, McDolus’s will serve to find the best sustainable food practices for the town of Dolus and the island of Oléron, which lies just off the coast of the famous blue cheese town of Rochefort in southwestern France. But not everyone in Dolus is happy about the island ban on fast food.

Back in January 2015 people took to the streets in protest, claiming their right to tuck into “un hamburger et frites”.

This love-hate relationship with “McDo” and fast food is very much a French problem.

There have been campaigns against McDonald’s “aggressive marketing” in Paris and elsewhere as well as French food faux pas, but there have also been calls for McDonald’s to open in fast-food hungry towns and the French are known to have developed an appetite for the US's calorie-heavy grub.

In fact, a March 2018 study found that “le hambuger” is now the most popular snack in France, appearing on 85 percent of French menus.

Not great news for the guardians of French gastronomy!

FIND OUT MORE: Why do the French love McDonald's so much?