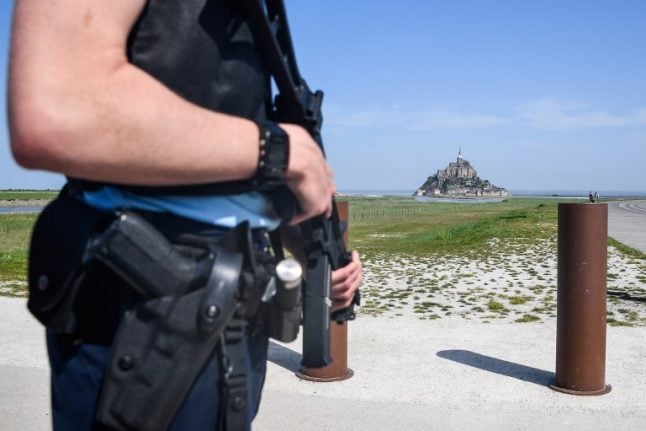 The UNESCO world heritage site, off the coast of Normandy in northwest France, was shut down for several hours Sunday after a tourist guide reported a man made threatening comments on a bus carrying visitors to the rocky islet.
A senior local official said the man then got into a fight with a cafe owner, during which he made more threats against security forces.
The source said a suspect in the case, a 36-year-old man, was arrested late on Sunday on a motorway near the Normandy city of Caen.
The man, who was known to authorities for drug trafficking and for driving without a licence, was first spotted at a motorway petrol station “where he boasted of being behind the threats”, the source said.
READ ALSO: Tourists were blocked from entering the island during the lockdown as around 50 police conducted a house-to-house search.
Holidaymakers were evacuated from hotels and the abbey was shut.
Mont Saint-Michel, a place of pilgrimage in medieval times, lies about a kilometre (half a mile) offshore and is attached to the mainland by a bridge.
Its stunning monastery, perched atop a rock, draws more than two million visitors a year.
The evacuation came with France still on high alert following a string of Islamic extremist attacks since 2015 that have killed more than 240 people.
Security forces have repeatedly been the target of attacks, most recently during a shooting spree and supermarket hostage-taking in the southern city of Carcassonne and nearby Trebes.