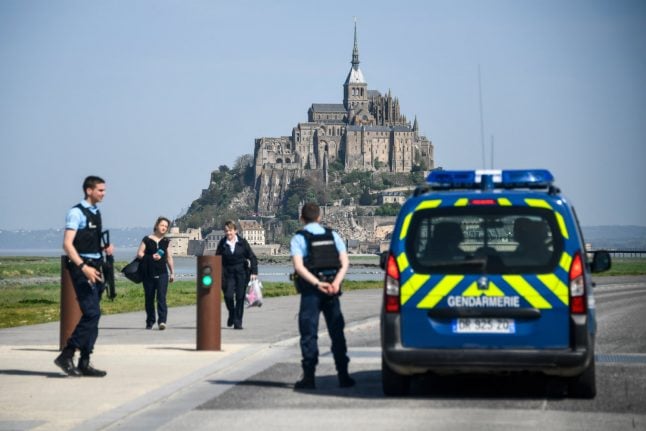 A tourist guide reported the man at around 7:45am after he made threatening comments on a shuttle bus carrying visitors to the rocky islet, a UNESCO world heritage site off the coast of Normandy in northwest France.

Top local official Jean-Marc Sabathe said the man then got into a fight with a cafe owner and made more threats against security forces.

Police tracked the man's first movements on CCTV after several other people raised the alarm but they lost sight of him, triggering the evacuation and a helicopter search for the suspect.

“I have evacuated the mount as a precautionary measure because no one knows the real intentions of this individual,” Sabathe told France Bleu radio.

“The man was mixed in with the first visitors of the day. There were no shots fired, no weapons. The village will be reopened as soon as security forces are certain that the individual is no longer on the site.”

Local authorities later said the island, which draws more than two million visitors a year with its stunning medieval monastery, would be reopened to the public at 2pm.

Tourists were blocked from entering during the lockdown as around 50 police conducted a house-to-house search.

Holidaymakers were evacuated from hotels and the abbey was shut.

“There was no panic, we were just surprised,” said Denis Surfys, a holidaying journalist.

Xavier Bailly, head of the monastery which looms over the island, said police had ordered him to stay at home.

“I'm staying calm, I'm waiting for instructions from the authorities,” he told AFP by telephone.

A photograph taken by a local firefighter showed the suspect as a man who appeared to be in his twenties, wearing a white t-shirt and dark trousers.

Mont Saint-Michel sits about a kilometre off Normandy and is attached to the mainland by a bridge.

The alert comes with France still on high alert following a string of Islamic extremist attacks since 2015 that have killed more than 240 people.

Security forces have repeatedly been the target of attacks, most recently during a shooting spree and supermarket hostage-taking in the southern city of Carcassonne and nearby Trebes.

Four people were killed in the attack last month, including a police officer who offered to take the place of a woman whom attacker Radouane Lakdim was using as a human shield.

Lakdim, 25, had earlier shot at a group of police officers out jogging, wounding one of them.