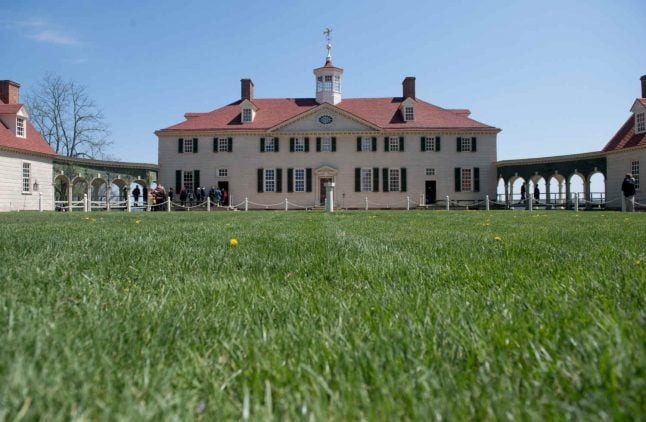 The Mansion at Mount Vernon, the estate of the first US President George Washington, will host next week's scheduled dinner between Donald Trump and Emmanuel Macron. Photo: AFP

The Trump-Macron relationship has been one of the few stable elements in recent American foreign policy, with the French leader emerging as the privileged European partner for the White House.

While Trump's relations with German Chancellor Angela Merkel have often been tetchy and he has clashed publicly with British Prime Minister Theresa May, the mercurial US leader has been consistently friendly with France's 40-year-old centrist.

Their warm ties will be on display from Monday when Macron becomes the first foreign visitor during Trump's term to be honoured with a state visit, nine months after Trump was guest of honour during France's national day on July 14th last year.

“The visit comes at a time of extremely close relations between France and the United States with regular and intense exchanges between the two presidents,” an aide to Macron told reporters this week.

The aim of the trip is to “continue and reinforce this dynamic,” he added.

Although their political background, age and personal lives are sharply different, the two men have bonded over their role as outsiders who outwitted their established political rivals to gain power.

“The friendship between our two nations and ourselves is unbreakable,” Trump told Macron during his trip to Paris last July, which ended with their famous 25-second-long handshake.

They have since worked closely on the fight against the Islamic State group in Iraq and Syria and coordinated Western strikes on Syrian regime chemical weapons installations last weekend.

But though they have found common ground on military matters, the list of subjects where they do not see eye-to-eye is long — from climate change and the 2015 Iran nuclear deal to the role of the European Union and trade.

Furthermore, Macron never misses an opportunity to condemn the forces of right-wing nationalism and populism — which brought Trump to power — and did so again last week during a speech to the European Parliament.

“Everybody has been asking the same question: why is Macron getting along with Trump?” said Celin Belin, a former French diplomat working as a fellow at the Brookings Institute in Washington.

“The question is also why does Trump like Macron? I think he enjoys the respect Macron provides and he respects Macron's power.”

Belin believes Trump has also deliberately picked a favourite in the European Union “and he has picked France because it's strong militarily and not an economic threat, which is the opposite of Germany.”

French diplomats privately concede that the main question for Macron is whether his proximity to the US unilateralist will lead to results, either in convincing the United States to take into account its EU allies or mitigating the fallout from Trump's decisions.

During the trip to Washington, Macron will have repeated opportunities to try to influence his American partner starting with a dinner at Mount Vernon, the home of the first US president George Washington, along with their wives Brigitte and Melania on Monday night.

Macron will also visit the State Department, take part in a state dinner at the White House and demonstrate his English-language skills — a rarity for a French president — in an address to a joint session of Congress on Wednesday.

Topping the agenda will be the Iran nuclear deal, which Trump is threatening to pull out of against the wishes of European nations, and US trade tariffs on steel and aluminium which could hit EU exports.

Trump is set to announce a final decision on the Iran deal and whether to prolong an exemption on EU metals imports in the first few weeks of May.

“We hope that the visit will be useful in convincing and in advancing things in the right direction,” Macron's advisor said on condition of anonymity, but he warned: “You shouldn't expect a diplomatic breakthrough.”

Other issues set to be discussed include US talks with North Korea and relations with Russia following the poisoning of an ex-Russian spy in Britain, as well as the Israeli-Palestinian conflict and the Syrian civil war.