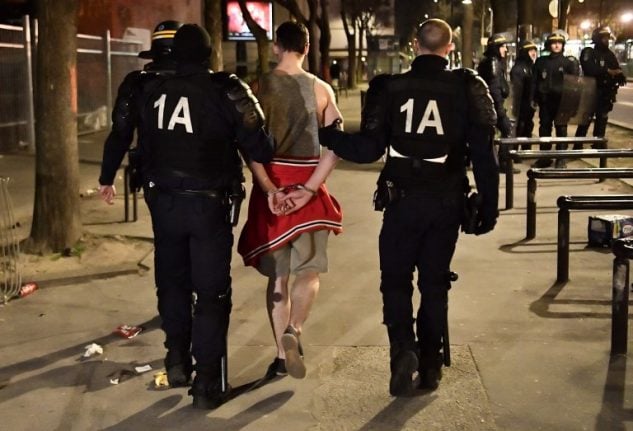 A protester is arrested at the Tolbiac campus, part of the prestigious Sorbonne University, as police break up a protest camp on April 20, 2018, in Paris. Photo: AFP
Around a hundred officers poured into the 22-storey tower dominating the Tolbiac campus on the Left Bank of the Seine, one of several French campuses that students have occupied in an echo of the momentous student revolt of May 1968.
Some of the students tried to flee while others threw bottles and other objects at the police, an AFP journalist at the scene said.
The university chancellor had requested on April 9 that the police intervene to clear the campus, which was occupied on March 26, but they had initially held off, citing security concerns.
The Paris police department said Friday's operation had passed off “without incident”. Photo: AFP
“We did not resist,” one masked protester told AFP, saying that the around 100 students holed up inside the tower were “tired”.
One person was arrested on charges of “rebellion”.
Students began occupying campuses in March over reforms introduced by Macron that introduce an element of selection for access to basic university degree courses for the first time.
Currently, French students who pass their school-leaving exams can enroll in any three-year degree course at a public university of their choosing.
The government has argued that changes are needed to tackle rampant overcrowding in some courses like law and psychology and bring down a high
student failure rate. Photo: AFP
But students unions and leftist parties see it as an infringement of the right to education for all.
The Tolbiac campus was one of the flashpoints in the protests, which also drew in Paris's prestigious Sciences Po university — Macron's alma mater —
this week.
The entrance of the site, which was guarded by police Friday, was littered with tables, banners, beer bottles, rubbish bags and other objects.
Interior Minister Gerard Collomb praised the police raid as a “success” and said it would remain closed while being cleaned up.
With end-of-year exams approaching the government had been under pressure to end the strikes and sit-ins, which had shut down four universities and disrupted classes at several others.
Last week the police were called in to evict protesting students from the famed Sorbonne University, the epicentre of the May 1968 protests.
READ ALSO: