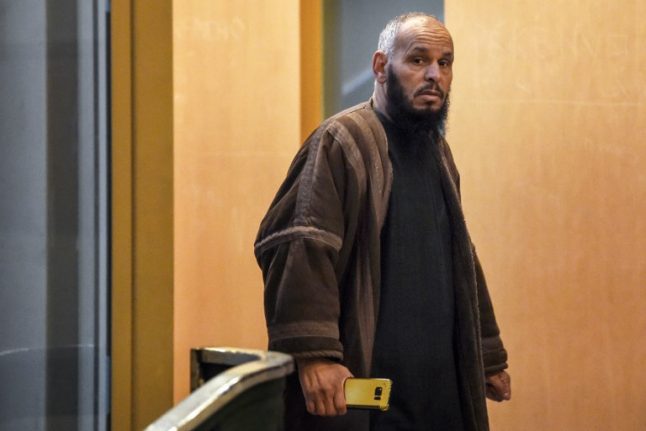 El Hadi Doudi, the Algerian imam of a Salafist mosque in Marseille. Photo: AFP
The expulsion of Algeria-born El Hadi Doudi back to his home country came after his appeal with the European Court of Human Rights was rejected earlier
this week.
Doudi, 63, had long been on the radar of Marseille police, who considered him an “authority” on Salafist interpretations of Islam, a Sunni branch which demands a strict conservative lifestyle.
While a majority of Salafists disdain violence, some followers embrace the use of force to promote their beliefs.
France has been wrestling with how to counter the influence of extremists after a string of deadly jihadist attacks by people later found to have moved in Salafist circles.
READ ALSO: Several members of Doudi's mosque — one of Marseille's largest before its closure in late 2017 — are suspected of having gone to fight alongside jihadists in Iraq and Syria in recent years.
The interior ministry based its decision to deport Doudi on an analysis of 25 sermons obtained by intelligence services starting in January 2013.
Officials said his preachings included “calls for the defeat and destruction of infidels” and descriptions of Jews as “unpure” and “the brothers of monkeys and pigs”.
He was also accused of urging his followers to proclaim “Allahu Akhbar” (God is greatest) in public places in order to “frighten the unbelievers”.
Increased expulsions
Last month some French lawmakers went so far as to urge a ban on the movement after four people were killed during a shooting spree and hostage taking in a supermarket by a homegrown jihadist in southern France.
Others called for “preventive detention” of the most radicalised Islamists already on police watch lists, after it emerged that attacker, Moroccan-born Radouane Lakdim, had recently been summoned for an interview with authorities.
France expelled 20 radicalised foreigners living legally in the country last year, a number which Interior Minister Gerard Collomb said was “the highest ever”.
Doudi, a father of seven who arrived in France in 1982, denied spreading messages of hate, while his followers claimed he was opposed to jihadist violence.
His lawyers also claimed he was at risk of torture and “inhumane or degrading treatment” at the hands of Algerian authorities, but the European rights court rejected that argument this week.
Doudi's deportation comes shortly after that of Mohammed Tlaghi on March 28 to Morocco, following the closure of a mosque in Torcy, in the eastern suburbs of Paris.
The imam, who was also a high-school maths teacher, was found to have “explicitly legitimised armed jihad and called on followers to pray for jihadists so they could destroy enemies of Islam in France and the rest of the world,” authorities said.
The mosque came under surveillance after its imams urged support for members of the so-called “Cannes-Torcy cell” suspected of planning jihadist attacks.
France remains on high alert following jihadist attacks that have killed more than 240 people since 2015.