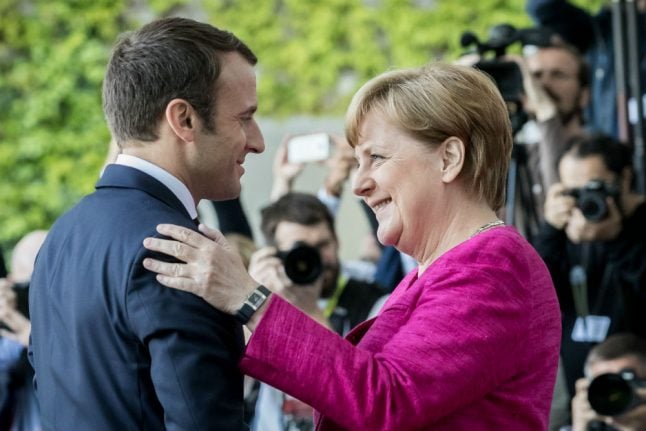 In a sign of the low expectations for a breakthrough, Merkel said the leaders' brief meeting would be “another building block” on the road to finding “common solutions” ahead of a European Union summit in June.

The pair are due to give press statements at 1:00 pm (1100 GMT) before holding talks at the Berlin Palace, a historic site undergoing extensive reconstruction — an apt setting for discussions on Macron's plans for a post-Brexit overhaul of the bloc.

But the Frenchman's dreams of driving through the changes with Merkel by his side were dealt a blow this week when her own conservative CDU/CSU bloc raised objections to his flagship proposals for a common eurozone budget and an expansion of the EU's bailout fund.

Macron defended his bold ideas in a passionate speech to the European Parliament on Tuesday, describing eurozone reforms as “indispensable” to challenging the rise of authoritarianism and nationalism on the continent.

But observers doubted whether his lofty words changed any hearts and minds in Berlin.

“Macron must feel like a suitor who tries and tries to woo his beloved, even singing under her balcony, but is fobbed off with platitudes,” the Handelsblatt financial daily wrote.

Much of Berlin's resistance is rooted in deep-seated German wariness of any measures that could lead to debt pooling, or German taxpayer cash flowing to spendthrift neighbours.

And while Merkel has in the past voiced cautious support for Macron's ambitions, she has stayed vague on details.

Having just started her fourth term as chancellor, her room for manoeuvre has been limited by her bloc's weak showing in last year's general election, which saw traditional parties lose millions of voters to the far-right.

With her parliamentary majority badly reduced, Merkel can't afford a rebellion by her own MPs.

And although her centre-left coalition partners the Social Democrats are more openly pro-EU, Macron lost his loudest cheerleader when former European Parliament chief Martin Schulz stepped down as SPD leader in February.

“The French president knows very well that not all his ideas can be realized, we are now looking at what is possible,” Social Democratic Finance Minister Olaf Scholz told the Frankfurter Allgemeine daily.

Lawmakers from Merkel's CDU/CSU alliance threw down the gauntlet this week when they attached strict conditions to transforming the EU's bailout fund into a European Monetary Fund that can act as a “lender of last resort”.

Setting up such a fund would require a change to EU treaties, they wrote in a position paper, which would require the approval of each member state's parliament.

They also said national lawmakers, not the European Commission, should have the final say over any aid disbursements.

Macron's proposed eurozone investment budget meanwhile was dismissed by Merkel's party as not “a top priority” when the bloc had yet to figure out how to plug the hole left in the wider EU budget by Britain's departure.

Differences also remain on the completion of a eurozone “banking union”, generally seen as one of the least controversial issues but viewed sceptically in Berlin, in the belief that Germany would be on the hook to save fragile banks in other countries.

Ahead of Thursday's talks, Merkel distanced herself from some of Macron's pet projects, saying the changes Europe needed were not just about the single currency or the banking union — “far from it”.

“Germany can bring its own contributions” to the debate, she told reporters, singling out the need to improve the bloc's competitiveness and create a common asylum policy.

Germany is not alone in slamming the brakes on Macron's drive to bolster the eurozone.

A group of smaller northern EU countries, led by the Netherlands, have also pushed back, warning that they refuse to be “railroaded” into sweeping reforms.

Faced with these northern headwinds, France has stepped up efforts to win support from the bloc's southern countries, recently inviting Italy and Spain to help steer the reform process.