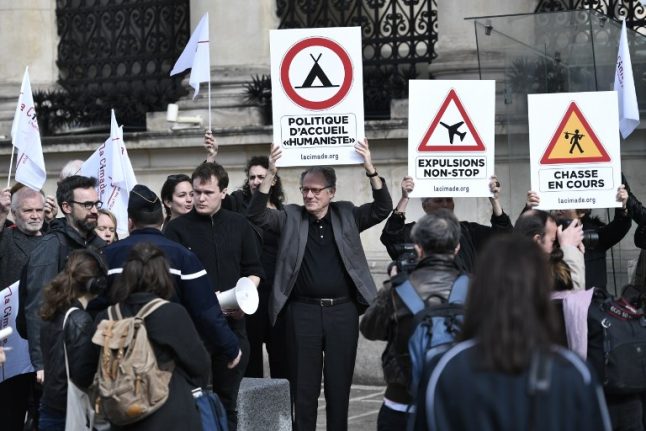 People hold placards during a demonstration to demand the withdrawal of the "asylum-immigration" law. Photo: AFP
The government argues that tighter controls are needed to check the rise of anti-immigration populists, who are on the march across Europe from Berlin to
Budapest after suffering a setback in last year's French elections.
“I fear that if we do not resolve the problem facing us… others will do it without any humanity,” Interior Minister Gerard Collomb said earlier this
month.
The bill aims to both cut waiting times for asylum applications — from around a year currently to six months — and make it easier to deport those
turned down as “economic” migrants.
The right-wing opposition say the bill is too soft but left-wing parties and NGOs have branded it repressive.
“We cannot take on the misery of the world,” Macron, who campaigned as a champion of open borders but has adopted a tough line on migration since
taking office, said in an interview with BFMTV on Sunday.
READ ALSO: Protest outside the French parliament against the new immigration bill. Photo: AFP

Macron pointed to the “ticking bomb” of population growth in Africa, wars and climate change among factors that would continue driving migration to

Europe in the years to come.
Faced with an “unprecedented” wave of arrivals the government would focus on welcoming those whose lives were at risk in their country of origin, he
said firmly.
France received a record 100,000 asylum applications last year, bucking the general trend in Europe, where the number of asylum seekers halved between
2016 and 2017.
A shortage of accommodation means many wind up on the streets of Paris, or the northern port of Calais, a gateway to Britain, where a squalid camp
housing thousands of migrants was razed by the state in late 2016.
A February survey by pollsters BVA showed 63 percent of voters felt there were too many immigrants in France, home to around six million people who were
born in another country.
'Unworthy of France'
On Monday, France's human rights ombudsman Jacques Toubon slammed the “unacceptable conditions” facing around 1,000 migrants packed into a new
tented camp along a canal in northeast Paris.
“We cannot remain on this path which is unworthy of France's welcoming tradition and increasingly difficult for some of our fellow citizens,” Collomb, one of the more hawkish figures in Macron's left-right administration, argued in parliament this week.
The bill doubles the time that failed asylum seekers can be detained to 90 days, making it easier to deport them.
It also reduces the time they have to lodge their application from 120 to 90 days and gives them just two weeks to appeal if unsuccessful, a period slammed by NGOs as far too short to gather more evidence in support of their claim.
Once accepted, however, refugees will be given more help to integrate, by, for instance, gaining the right to work and being given more French classes. The tents of undocumented migrants where they have been camping outside the prefecture of the Bouches-du-Rhone department in Marseille. Photo: AFP
The government has defended the legislation as balanced but several members of Macron's usually compliant Republic on the Move (LREM) party have vowed to reject the bill or abstain when it is put to a vote Friday.
“This bill stigmatises foreigners,” Francois-Michel Lambert, a LREM lawmaker representing the southern Bouches-du-Rhone region, told BFMTV.
Delphine Bagarry, an MP representing Alpes-de-Haute-Provence, told France Inter radio that while she supports the need to shorten the agonising wait for
asylum, “it cannot be at the expense of their right to a defence”.
Fearing that any sign of weakness could embolden dissidents to break ranks on other issues, party leader Richard Ferrand has threatened LREM naysayers
with expulsion.
But the bill is expected to pass, despite strong opposition from far-right leader Marine Le Pen — the runner-up to Macron in last year's election — and
the conservative opposition Republicans.
The Republicans' hardline leader Laurent Wauquiez charged that Macron's presidency was on course to legalise “a million more immigrants” by 2022.
Right-wingers have also argued that provisions allowing underage refugees to bring siblings to live with them in France will have a “pull effect” on migration.
by AFP's Clare Byrne