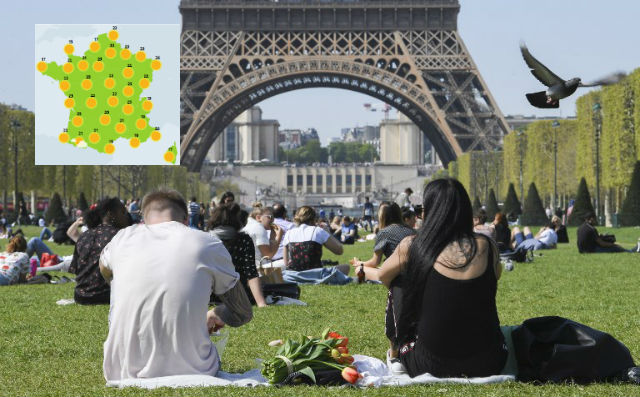 Photo: AFP
Temperatures in France are around 6C to 10C higher than the seasonal average as the sun shines across the country.
In Paris on Thursday afternoon, temperatures will reach highs of a staggering 29C and the eastern Grand Est region and south west Nouvelle-Acquitaine region aren't far behind with highs expected to reach 28C, according to France's national weather agency Meteo France. Weather map for Thursday afternoon 2 pm – 5 pm. Map: Meteo France
Meanwhile swathes of the country are set for temperatures in the mid-high 20s.
However somewhat surprisingly the Riviera and Corsica are expecting the coolest temperatures at around 19C.
Nevertheless for most of France the unseasonably hot weather is expected to continue into the coming days, with the mercury set to reach 29C once again in the French capital on Friday afternoon.
Temperatures in the capital and across the country are expected to drop by a few degrees on Saturday and Sunday but remain high.
And the sun is predicted to shine throughout the weekend before the mercury takes a dip across the country on Monday and the clouds move in across northern parts of France.

Rain is expected to hit Normandy on Saturday and there will be showers in some northern areas on Sunday. Weather map for Friday afternoon 2 pm – 5 pm. Map: Meteo France
Avalanche risk
But while the sun and warmth is cheering much of the country, some departments in France are experiencing a heightened risk of avalanche due to the sudden heat.
Departments around the Pyrenees mountain range including Pyrenees-Atlantiques, Hautes-Pyrenees, Haute Garonne, Ariege and Pyrenees-Orientales have been placed on alert.
And so have the departments around the French Alps, including Haute-Savoie, Savoie, Isere, Hautes-Alpes, Alpes-de-Haute-Provence and Alpes-Maritimes.
Corsica is also on alert for avalanches.