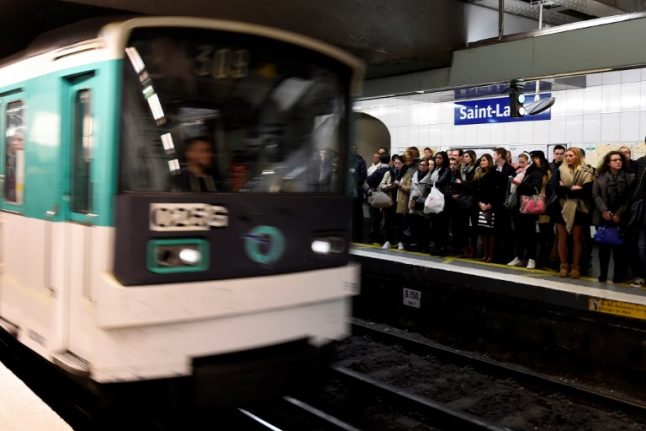 The hardline CGT, France's biggest trade union, has called for a public transport in Paris this week.

Union members of the CGT RATP, who work for the Paris transport body RATP, have called the strike for Wednesday evening at 10pm, announcing that it will run until Saturday 21st at 7am.

If the strike goes ahead as planned, Parisian may see disruptions to Thursday and Friday’s traffic on the RER A, the RER B, the Metros, the trams, and the buses.

The RATP said it will release forecasts for potentially disrupted Metro traffic later on Wednesday.

The strike has been called partly in solidarity with French rail workers who are also on strike on Wednesday and Thursday as part of ongoing industrial action.

The strike comes as French rail workers gear up for yet another two-day strike, also starting on Wednesday the 18th.

French rail chiefs SNCF have been forced to cancel scores of services across the country due to a the strike.

One TGV train out of three is expected to be operating on Wednesday, as well as two TER and two Transilien trains out of every five and one Intercite train out of four.

On international services, there will be four Eurostar trains out of five, one Lyria train out of three, while Thalys traffic will be “almost normal”, according to the SNCF.

These disruptions are the latest of three months of rolling strikes planned by rail workers that began on April 3 over plans to overhaul the heavily indebted train operator SNCF, the biggest test yet to President Emmanuel Macron's wide-ranging drive to reform the country's economy.