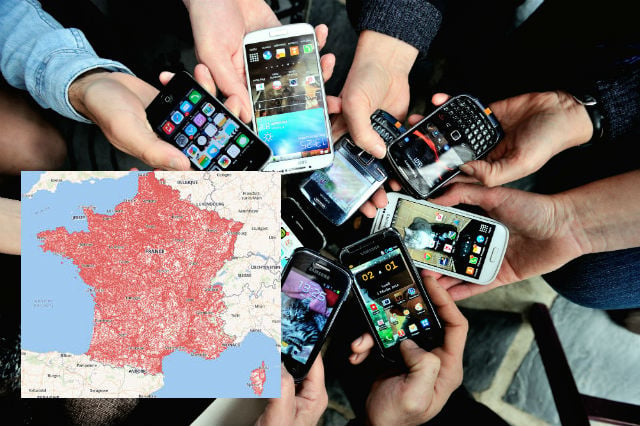 First, we’ll take a look at the four main providers – Orange, SFR, Bouygues, and Free – followed by a closer look at what you can get and where you can get it.

Orange is the biggest

If you want safety in numbers, stick with Orange. It’s by far the biggest operator in France with over 10 million users.

The company also has around 100,000 employees in France, which is worth taking into consideration because it means you’re (probably) more likely to have your phone call answered or your technician actually arrive.

Of course, Orange isn’t perfect. It gets its fair share of complaints and had the second-highest number of disgruntled customers in a study published earlier in 2018.

The facts: According to France's telecoms communications authority Arcep, 4G mobile internet from Orange reaches 96 percent of the population and 77 percent of the country geographically. Orange leads all operators for both these stats.

Offers change all the time but at the moment the cheapest offer from Orange for a mobile phone contract is €4.99 a month for the first 12 months You get 50 Mb of internet, two hours of calls and unlimited SMS/MMS within France. Here's a comparison page if you want to check all the offers. Customers are least happy with SFR

For three years running, operator SFR has topped the charts when it comes to disgruntled customers, as The Local reported in March.

Yes, 60 percent of all the customer complaints lodged at the the French Association of Telecommunications Users (Afutt) were about SFR.

Common complaints centred around the loss of internet connection or a deterioration in the quality of download speeds.

And when it comes to complaints about phones, SFR topped the charts again with 53 percent of complaints.

The facts: According to France's telecoms communications authority Arcep, 4G mobile internet from SFR reaches 95 percent of the population and 74 percent of the country geographically. In both of these categories, SFR finished second of all four operators.

Cheapest offer: Without a contract, it's €9 a month for 40 Mb and unlimited Calls/SMS/MMS in Europe. Here is comparison page of the main providers. Bouygues Telecom is somewhere in the middle

Besides being the most difficult to pronounce, Bouygues is also trailing when it comes to coverage and reception (but not by as much as Free, more on this later).

The facts: According to France's telecoms communications authority Arcep, 4G mobile internet from Bouygues reaches 95 percent of the population and 74 percent of the country geographically. Bouygues ranks equal second and third in these categories, respectively.

Cheapest offer: Without a contract, it's as little €7.99 a month for 20 MB in Europe and unlimited Calls/SMS/MMS within France. (Click here to compare the prices of the main providers) Free is ‘the worst’

Free performed the worst in pretty much every statistic in the findings from Arcep. The average download speed across the country was woeful compared to the top three (Free was 14 mbps compared to the others all over 20 mbps). And you can forget using your Free internet on the rail networks, with Free scoring 16 percent compared to the other three operators which all ranked above 60.

Free is France's newest operator being only six years old but it is coming under increasing criticism for not having done enough to catch up the other providers.

The cost: Without a contract, it costs as little as €2 a month and you get two hours of calls, unlimited SMS/MMS and 50 MB of internet in France and also Free wifi internet access service everywhere in the country when possible. So which of the main providers should you pick? If you look at the overal performances (see chart below) you'd think Orange would be your first choice and Free your last choice.

But it's not quite that simple. Not least because price may be a factor for you but also the most important thing to take into account is the coverage in your area and the places you like to use your mobile phone, such as on trains or on the Metro in Paris.

France's telecoms communications authority Arcep made an impressive map in September that allowed mobile users to compare the coverage of the four main operators.

The interactive map is said to be accurate to within 50 metres of any address in the country.

The map, the first of its kind in France, essentially allows the user to know how good the service will be in their area depending on where they are in the country.

There is also this map produced by France's National Agency of Frequencies (ANFR) which shows where all the mobile phone masts and antennas are in France, which may also help users get an idea of how well their area will be covered and by which provider.

When it comes to 4G mobile internet, your best bet is to stick with Orange, Bouygues, or SFR, all of which reach around 95 percent of the country (see below).

You’d be taking a gamble with Free, depending on where you live, as it only reaches 82 percent of the population.

Above: The reach of 4G mobile internet in France

All statistics are considerably better for 3G internet, which reaches 99 percent of the population (or more) for all major operators.

When it comes to making phone calls and sending texts, all four operators reach above 99 percent of the population.

And lastly, as you can see in the graph below, Orange topped the tables in nearly every facet of having phone coverage or internet reception, including streaming YouTube videos, sending texts, and uploading information.

However it's worth noting the scores were slightly different when it came to small towns in rural France as the chart from the site Numerama shows below. Essentially don't expect the coverage to be as good in the department of Deux-Sevres as it is in Paris.

Arcep also notes that “all operators, with the exception of Free Mobile, have improved the quality of their [mobile internet] services.” If you spend a lot of time travelling in France, whether it's on public transport or on motorways then it will be important for you to know which provider will give you the best coverage.

On motorways and main roads in France for example Oranges, Bouygues and SFR have rates between 76 percent and 78 percent for downloading web pages within 10 seconds. However when it comes to Free the rate drops to just 18 percent.

There is a similar gulf for TGV trains. Whilst Orange is out in front with 72 percent download success, Free is down at 13 percent.

And for other trains (Intercités and TERs), while Orange Bouygues and SFR have downloads rates between 66 percent and 69 percent, Free is down at 18 percent.

Free also comes in last place when it comes to the the quality of the internet on RER trains and the capital's Metro system.

In other words the conclusion is quite simple. If you spend a lot of time on transport and need the internet on your phone, then don't go with Free.

Although the rollout of Wifi services and 4G on the Metro in Paris may mitigate this issue. So which is the best choice for you? The answer, really, is that it depends on where you are in France and what you want to use your phone for.

“Contrary to what you might think, there is not really a 'best' phone operator. There is the 'best' operator for you. Indeed, the operator that covers most of the French population might not be the one that best covers the area you are in.”

In other words it might be worth asking around in the village or town where you live about which provider offers the best coverage in that area.

If it's just for sending texts, for example, you can't really go wrong with any of the operators. Or, if you're in a big city it's unlikely that you'll see much of a difference.

But if you're elsewhere, it's probably best to consult the interactive map here to find your best bet.

And if you're unlucky to be in one of the areas with patchy internet connection, fear not: phone operators made an agreement with the government in January to invest €3 billion to make sure that even the deepest and darkest corners of “La France Profonde” get decent coverage.