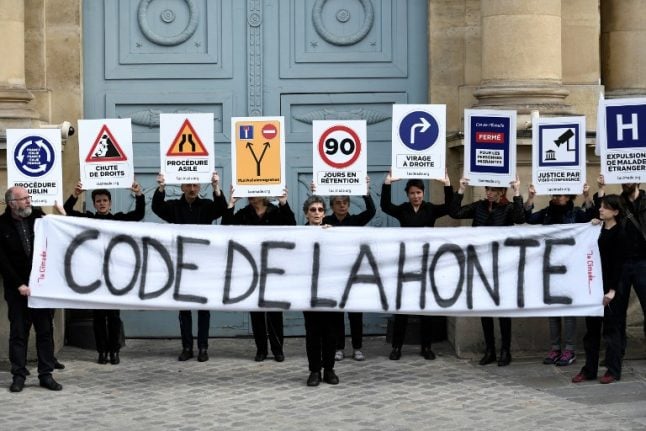 Protest outside the French parliament against the new immigration bill. Photo: AFP

Critics say the bill is repressive, but the centrist government insists it is creating a more efficient system to sift out genuine refugees from those simply seeking a better life in France.

“Under the guise of providing a more effective asylum system, the bill includes a series of measures that would diminish access to protection,” said Bénédicte Jeannerod, France director at Human Rights Watch (HRW).

“If France intends to improve the efficiency of its asylum system, it should start by allocating sufficient resources to the existing system, and not punish asylum seekers for these deficiencies by truncating their rights,” she concluded in a statement from the group.

The concerns raised by rights groups such as HRW include the following:

The bill would reduce the period for filing an asylum application from 120 days after entering French territory to 90 days. But asylum seekers already face major obstacles to filing their applications, and making the period shorter means more will likely miss the deadline.

Applications would still be able to be made after the 90 days, but these would likely be not examined thoroughly as the officials handling them would be inundated with cases, according to HRW.

The bill would reduce from one month to 15 days the time for asylum seekers to appeal if their request has been turned down. But many may lose out because that short time-frame is not sufficient to prepare for what can be a technical and complex procedure, often requiring legal support.

Asylum seekers can currently remain in France while their appeal of their rejected request is being examined. The new law would let the government deport them – if they are from what are deemed to be safe countries – while the appeal is being heard.

HRW says that removing the automatic suspension of deportation during an appeal means asylum seekers could be sent back to their country even if their claims of persecution have not been fully adjudicated.

The bill would increase the maximum administrative detention period for those awaiting deportation from 45 to 90 days. But HRW points out that data it has viewed shows that foreigners in mainland France in 2016 were expelled on average after 12 days of detention.

“The justification for this provision, much less the necessity, is therefore very much in doubt,” the rights group said.

HRW laments that the draft law does not address the issue of the detention of migrant children, “when it could have been an opportunity for France to abolish this practice.” It noted that in six cases between 2012 and 2016 the European Court for Human Rights ruled hat France’s detention of children violated the prohibition on inhuman treatment or punishment.