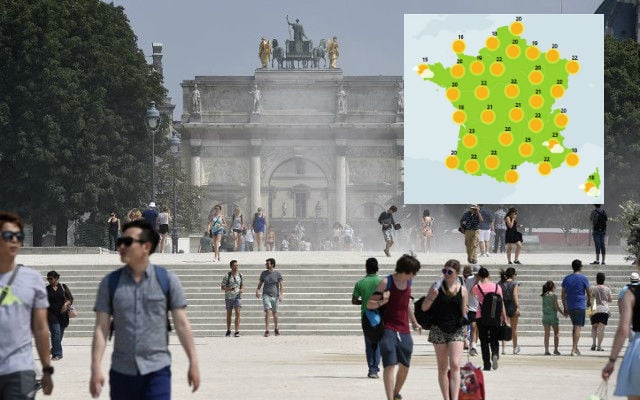 Photo: AFP/Meteo France
France is about to experience its first blast of summer in the coming days.
While Monday will be mixed cloud and sun, temperatures of between 24C and 26C and sunshine will hit the country from Tuesday, according to France's national weather agency Meteo France.
And the mercury, which is set to be much higher than average for the time of year, is expected to keep on rising on Wednesday and right up to the weekend.
Temperatures will reach between 24C and 26C in both the north and south of the country and people in the south west are set for a real scorcher with the mercury reaching up to 28C in the south west. Weather map for Tuesday 2pm-5pm. Map: Meteo France
On Wednesday afternoon, the mercury will reach 24C in Paris and Dijon and up to 27C in Bordeaux.
In the French Alps the mercury could reach up to 26C on Wednesday afternoon, with temperatures expected to reach 24C in the eastern region of Grand Est.
In Provence, temperatures will reach highs of 24C. Weather map for Wednesday 2pm-8pm. Map: Meteo France
But are these temperatures normal for the season?
While it might seem like a shock after a particularly cold winter, the temperatures are typical of what we usually see in the spring.
And weather experts are saying that it's still a bit early to say summer is here, with the sun set to be less intense and the evenings cooler than during July and August.
Temperatures are expected to take a slight tumble at the weekend.