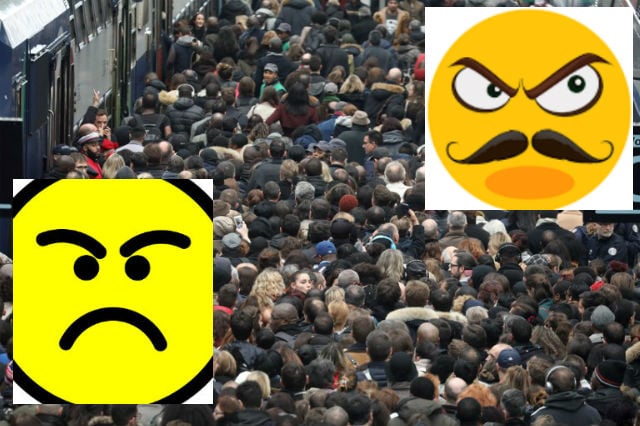 Whether it’s ranting about train strikes or moaning about the size of the queue at the boulangerie or awful commute to work, Parisians have a reputation for loving a good grumble. And no more so than in France.

A new study albeit one that will hardy impress seasoned scientists and researchers suggests the French capital really is the crankiest city in the country.

The research by messaging app Mood Messenger looked at all the emojis included in text messages sent by hundreds of thousands of users around the country  over a six-month period and came to the conclusion that Paris really is the city of moan.

“We achieved this ranking by looking at real algorithms. But we’re not claiming to have done a sociological study,” the app founder Saïd Hadjiat told Le Parisien. “There’s a lot of ironic humour in our approach.”

Despite the lack of science behind the study, its conclusion may not surprise many.

But for some Parisians, complaining is somewhat of a badge of honour.

Giraud's hugely popular Paris show ‘How to become Parisian in one hour?’ mocks locals for their famous tendency to grumble. And his crowd are quite happy to be the butt of his jokes.

“I’ve never had a member of the audience come up to me and say, “You’re exaggerating, we’re not like that.” And nobody’s ever said to me, “We’re going to make an effort to change.” There’s a pride in being Parisian”.

That seems to be backed up by a 2010 survey by Le Figaro newspaper that asked thousands of Parisians what they thought of themselves.

The most common attribute was “stressed” with some 23 percent of the capital's residents admitting they were a little highly strung. But 14 percent of respondents also confessed to being “grumpy”.

While the French might be known for their national motto “liberté, égalité, fraternité”, Parisians go by another motto: “Metro, boulot, dodo”. In other words their daily lives are just Metro, work then sleep which to them justifies being bit grouchy all time.

Elsewhere in France, the central, mountain city of Clermont-Ferrand made it to second place in the ranking. But for the city’s former deputy mayor Gilles-Jean Portejoie, complaining is as much of a sport as rugby.

“In Clermont-Ferrand, we complain but we quickly forget about it, and it never gets nasty,” he told Le Parisien. “We’re furious if we lose a rugby match but will easily forgive and forget”.

On the contrary, residents of southern cities like Bordeaux and Toulouse are among the French people who send the least ‘cranky’ emojis.

For Saïd Hadjiat, head of the Marseille-based app behind the study, it seems a bit of vitamin D isn’t just good for your skin. “The sun must be important,” he smiled. “When we moan in the south, we express it in a different way, not with emojis but with banter”.