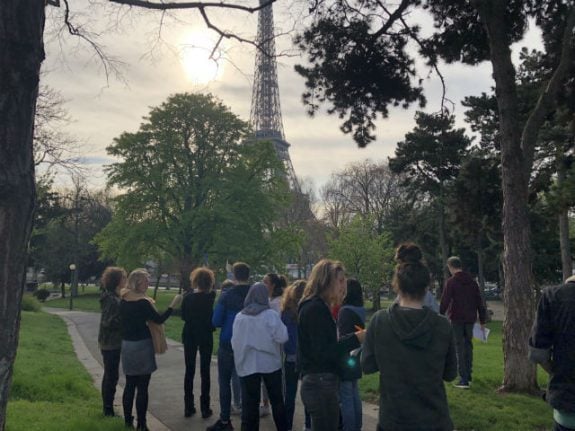 Students step out during maths class to measure the Eiffel Tower. Photo: International School of Paris

A string of companies, including government organisations and banks like Goldman Sachs, have already announced plans to move operations from London to the French capital and numerous others, particularly in the finance sector, are considering the same.

French officials estimate that as many as 10,000 jobs will move from London to the Paris area in what is being dubbed ‘Brexodus’. With this anticipated influx of new workers will come a large number of families in search of a new school for their children.

At the International School of Paris (ISP) in the shadow of the Eiffel Tower, the school’s administration office has been busy fielding inquiries from a number of London-based companies seeking education solutions for their employees.

“We have been meeting with quite a few of the banks that have indicated that they will leave London for Paris in the near future,” ISP’s head of admissions Courtney Knight said.

Find out more about the International School of Paris

“Although they would not be relocating their employees until the 2019/2020 school year, these banks are already looking into the options for their employees and their families for when they come to Paris.”

In what Knight called “a lucky coincidence,” the school will be opening a new state-of-the-art middle school campus just as many companies begin preparing for Brexodus.

The new campus will be a mixture of old and new, anchored by a 19th-century neo-gothic former mansion on rue Cortambert and complemented by two other buildings that in total will add 3,000 m2 to ISP’s centrally-located campus.

A preview of classrooms and student spaces at the new campus. Construction is still underway but will be finished in May.Photo: International School of Paris

Opening in September 2018, the new campus will have room for 350 students in grades six through nine, bringing the school’s total attendance up to 950. The new middle school facilities will join ISP’s Ranelagh primary school and Beethoven high school campuses, both located within a ten-minute walk.

“We already had an established growth plan so the campus has nothing to do with Brexit,” Knight said. “It was just the right time for the school to expand and we’re fortunate that we will have the capacity to add an additional 350 students to the school right at the same time that a large number of international families will be starting a new life in Paris.”

The new campus will include a spacious gated courtyard and outdoor learning space, What’s more, its classrooms will feature interactive touchscreens and ergonomic furniture that helps children to learn in different ways, for example, chairs on wheels to facilitate group work and tables with built-in whiteboards so students can write without the need for paper.

Students will have their own spaces outfitted with lockers, couches and technology to support break-out learning. The campus will have a number of art and music spaces, including a 120-seat drama room, three science labs and a science terrace that faces the Eiffel Tower. When not in class, students can eat and relax in a student-designed cafe or play tennis, basketball or chess.

Helping children to settle in

With so many workers expected to come to Paris from London’s banking sector, ISP will face stiff competition in trying to attract the well-heeled new arrivals. But Knight said the school is uniquely positioned to become the choice of the transferring employees, and not only because it is the only accredited three-program IB World School in France. “Our real advantage compared to a French school or other international schools is that we really pride ourselves on welcoming not just the child but the family as well and making sure the school is the right fit for all involved,” she said. “We really put a lot of focus on the transition process and making sure that there is a soft landing for the students and their families.”

Find out more about the International School of Paris

Knight added that ISP’s diverse student body and its experience in welcoming new students – around 200 kids go in and out of the school each year – were also selling points for families relocating from London.

“We don’t have any affiliation with national programs, so the International School attracts families from all over the world. There are roughly 60 different nationalities each year and that really makes our community very welcoming,” she said.

“One of our students said it best: ‘The one thing that we all have in common is that we’re different,’” Knight continued. “I really believe that we have a diversity of vantage points that you can’t find in the other schools in Paris.”

This article was produced by The Local Creative Studio and sponsored by International School of Paris.