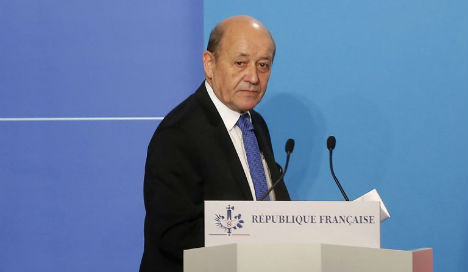 French foreign minister Jean-Yves Le Drian arrives to give a statement on Saturday morning. Photo: Michel Euler /Pool / AFP
“A large part of its chemical arsenal has been destroyed,” Le Drian told BFM television. “A lot has been destroyed in last night's strikes.”
He also said France had “solid intelligence” that the regime of Syrian President Bashar al-Assad was behind the gas attack in the rebel-held city of Douma last weekend, which monitors say killed at least 40 people.
Syria as well as its main backer Russia have denied being behind the attack, a claim that was dismissed by Le Drian, citing “overwhelming testimony” and extensive analysis by French intelligence services and
laboratories.
“The analyses are not yet finished… but will allow us to identify all the gases. There was chlorine, that's certain,” and preliminary evidence points to other gases as well, he said.
But although France has determined that high-ranking officers in the Syrian army ordered the attack, Le Drian said he could not state with certainty that Assad himself was behind those orders.
He warned, however, that France would not hesitate to strike Syria again in case of further chemical attacks.
“On the question of chemical weapons, there is a red line that must not be crossed, and if it should be crossed again, there will be another intervention,” Le Drian said. “But I think the lesson has been learned.”
“The point is to make sure there is no proliferation of chemical weapons,” he added. “The point was not to impact the regime's allies, nor even to impact the institutional functioning of the Syrian regime.”
Le Drian also said that for now President Emmanuel Macron still planned to travel to Russia for talks with President Vladimir Putin in May, while urging Moscow to work constructively on applying US Security Council resolutions on Syria.
“We have to keep talking with Russia, and Russia needs to realise that it has voted in favour of UN security resolutions (on Syria) and that they must be applied today, and not be carried away by the barbarity of Bashar  al-Assad,” he said.