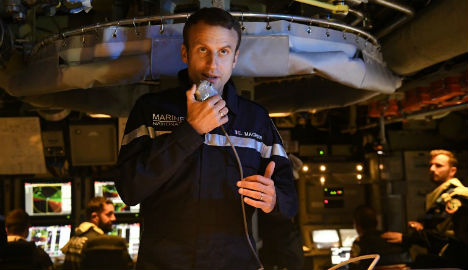 French president Emmanuel Macron at a visit to France's L'Ile Longue naval base in 2017. Photo: Fred Tanneau / Pool/AFP
On Friday night, like British leader Theresa May, he ordered his first  major military intervention.
Overnight, French and British aircraft took part in a wave of strikes against Bashar al-Assad's Syrian regime in response to alleged chemical weapons attacks. Though already active in a US-led coalition combating the Islamic State group in the region, the strikes against Assad represented a major escalation for French and British forces.
Macron, who faces a battle with trade unions at home over rail reforms, was widely seen as facing the sternest test yet of his foreign policy and commander-in-chief mettle.
“We cannot tolerate the normalisation of the use of chemical weapons,” he said in a statement on Saturday morning, adding that “the facts and the responsibility of the Syrian regime are not in doubt.”
Around the same time as he was musing about power to his friend Philippe Besson after his election victory last May, Macron also laid out a clear policy on using military force in Syria. In the same month, with Russian leader Vladimir Putin at his side, Macron said that further use of chemical weapons in Syria would be a “red line” that would trigger a response.
Having said on Thursday that he had “proof” that Assad was responsible — which is denied by the regime — analysts saw Macron as having no choice but to go ahead with strikes.
“When you fix red lines, if you don't know how to make sure they are respected, you're choosing to be weak,” Macron himself told The Guardian last June. “That's not my choice.”
Many French officials still bristle as they recall how former US president Barack Obama had set a red line too over the use of chemical weapons, only to pull back at the last minute in 2013. But in carrying through with his threat, Macron will be testing how far he can go against an intransigent Russia, which has denounced the strikes against Syria as a violation of the UN charter.
Russia's defence ministry warned that it might now supply Assad with its more recent S-300 air defence system, ratcheting up the stakes in case of any further strikes against his regime. Macron, who has made no secret of his ambitions for playing a key role in Mideast diplomacy, is heading to Washington for a state visit this month, before a visit with Putin in Russia in May.
French Foreign Minister Jean-Yves Le Drian said Saturday that the Russia visit was still on despite the heightened tensions.
Macron is scheduled to give a two-hour primetime interview on French  television Sunday night.