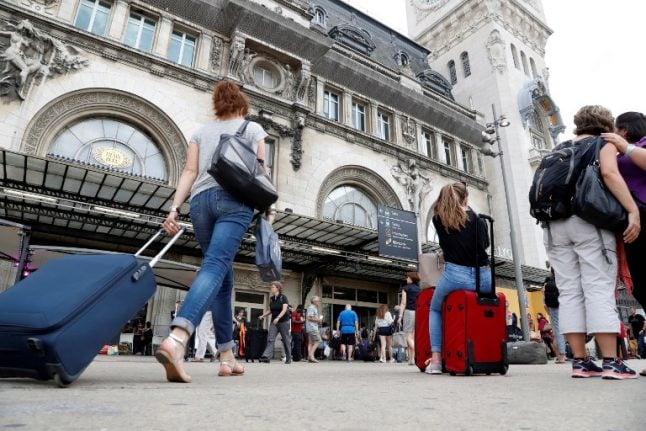 Travel agents are the hardest hit because they have to handle their customers’ problems when tourists are left stranded by a cancelled train or flight.

“Take the example of a cruise that starts in Marseille. The Paris-Marseille trains are cancelled. The customer can’t go on the cruise because the cruise ship won’t wait,” said Jean-Pierre Mas of the Entreprises du Voyage industry association.

“So the travel company has to pay the cruise ship on the one hand and reimburse the passenger on the other,” he told Europe 1 radio.

He said that the cost of reorganising train trips, flights and hotels for customers was costing travel agents around 500,000 euros for each day that transport workers strike.

SNCF rail workers on Friday were on their fifth day of rolling strikes and vow to continue stopping work two days out of every five until at least the end of June to force the government to back down on its plans to do away with certain perks that SNCF get.

Staff at Air France have for their part gone on strike three days in the past two weeks and vow to walk off the job on several more days this month if the company does not give them the six percent pay rise they want.

If the strikes continue as planned, losses to the travel industry are set to rocket in May, which has four bank holidays during which many French traditionally head off for long weekends.

But this year peolpe are holding off on making travel plans and booking hotels of holiday apartments because of the travel uncertainty.

Hotel industry figures show that hotel reservations were down 10 percent from March compared to the same period last year, and are set to fall even further.

Restaurants are also being hit, with their turnover dropping by up to 25 percent on strike days because many people eat in the workplace at lunchtime in order to leave work early in the hope of getting a place on the vastly reduced number of trains operating.

There have been no official figures so far on the overall cost to the economy of the strikes.
But SNCF chief executive Guillaume Pepy said on Monday that the stoppages at the rail firm had so far cost the company around 100 million euros, or more than 20 million euros per day.
Do I come to France during the strikes?

Since the strikes began The Local has been inundated with emails from worried tourists due to come to France wanting to know whether they will be able to catch a certain train on a certain date.

One of the problems is it's hard to know in advance because rail operator SNCF only reveal details of how many trains are running around 24 hours before the strike.

While SNCF and Air France have both advised people to change their plans on days of rail and air strikes and also suggested people avoid going to train stations and airports, it's important to note that there are still planes and trains operating on strike days.

On Friday, the latest day of rail strikes, SNCF revealed that the impact on services had lessened from when the industrial action began on April 3rd.

For example one third of TGV trains were running, compared one out of 8 when the strikes began. This could be a sign that things will get better as time goes on.

But of course strikes in France take on a life of their own and things may yet worsen.

French strikes: What can I do to avoid train and plane travel misery in France?