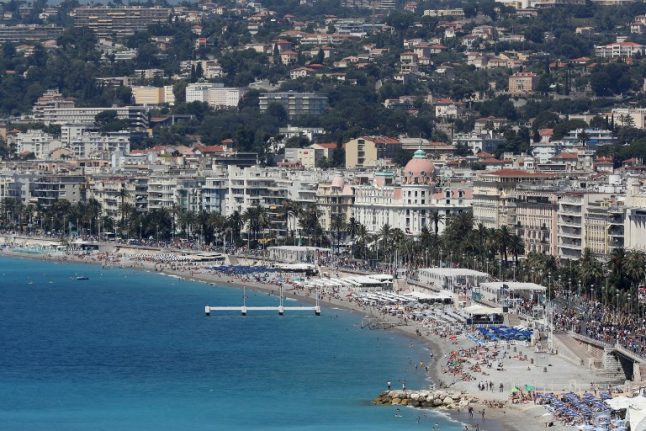 Nice, a city known for its beaches and elegant Mediterranean allure has just acquired another less desirable accolade as the town in France with the worst air quality,according to a new study that measured air quality in towns over the period of the last year.

Over the past twelve months, the quality of the air in the Riviera resort of Nice was “mediocre or bad” for 67 days – that’s over two months of the year – according to a ranking of air quality in 100 French cities drawn up by L’Express.

It explains that the high pollution levels are down to a number of local factors: the city is built on a narrow densely-populated coastal strip which has a lot of traffic and long sunny spells.

After Nice, France’s most polluted cities are Avignon (60 days), Marseille (57 days) and Aix-en-Provence (54 days), all in the country’s south.

“These pollution peaks are due to high amounts of ozone gas because of the sun, or due to higher pollutants released by industrial activity and road traffic,” Florence Péron from the region’s air quality controller Airpaca told L’Express.

“Nice suffers from the fact it is very sunny and from its geography, with a dense population and traffic on a very narrow coastal strip,” she said,

“In Nice, the levels of pollution collected are never very low,” Peron added. “But they are never very high either thanks to the sea winds that blow across the city”.

In a different survey of air quality carried out in 2016 it was Marseille that won the top spot as the place with the most polluted air in all of France, followed by Lyon and Paris.

And a 2016 report from the World Health Organisation found that the Paris suburb of Pantin, separated from the city by the ever-clogged peripherique ring-road, was the place in France with the worst air quality.

But if you’re looking for clean air, you need to head for France’s smaller towns with – you’ve guessed it – less people, less traffic and less industrial activity.

The top destinations according to the L'Express study are Cherbourg off the windy coast of Normandy and Limoges, Périgueux and Roanne in central France, which all registered less than 5 days of dirty air in a year in the Express ranking.

Air pollution is believed to be the main cause of some 48,000 deaths each year in France, with over 47 million French people exposed to a level of air pollution particles that is considered to be unsafe by the WHO.

France is one of nine EU countries which faces legal action from Brussels for failing to tackle air pollution.

Paris, which has recently implemented a number of measures to improve its air quality such as car-free days, has been recently called out by the European Commission for going above safe levels of air pollution.