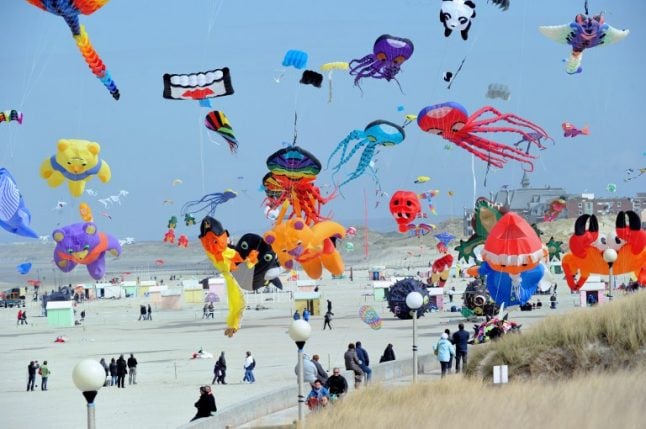 
The long, windy beaches of Berck sur Mer see hundreds of thousands of tourists gather annually to admire giant kites of all shapes, sizes and colours. Celebrating the 32nd year of the event, there will be displays, workshops and fireworks at night. 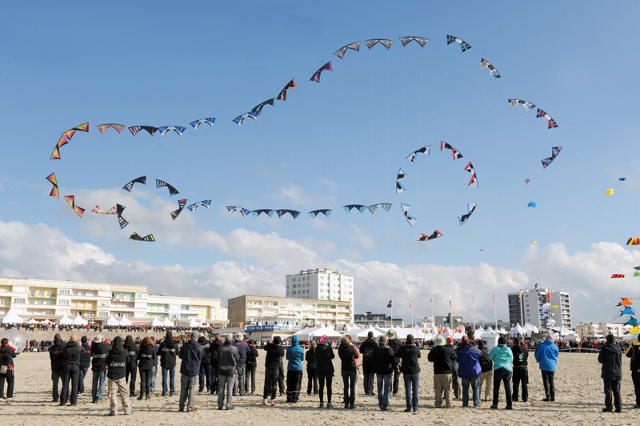 It's a sad time of year for seafood-lovers as the scallop season comes to an end, but Brittany fishing towns Erquy, Saint-Quay-Portrieux and Paimpol ensure it goes out in style with a dedicated festival.

There will be a parade, street entertainment, music and obviously plenty of food. Many restaurants offer special menus for the occasion and you can even go out with the sailors on one of the final fishing trips. 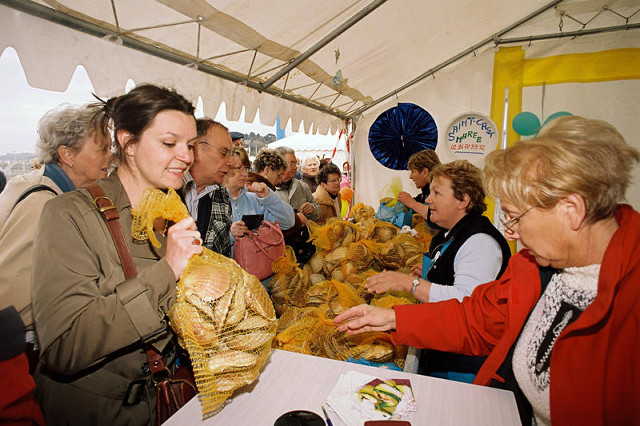 3. Festival of Birds and Nature, Somme Bay, Northern France, from the 21st to the 29th of April

A festival dedicated to bird and animal watching that has been around since 1991. For 9 days, you can discover the Somme Bay like you have never seen it before. 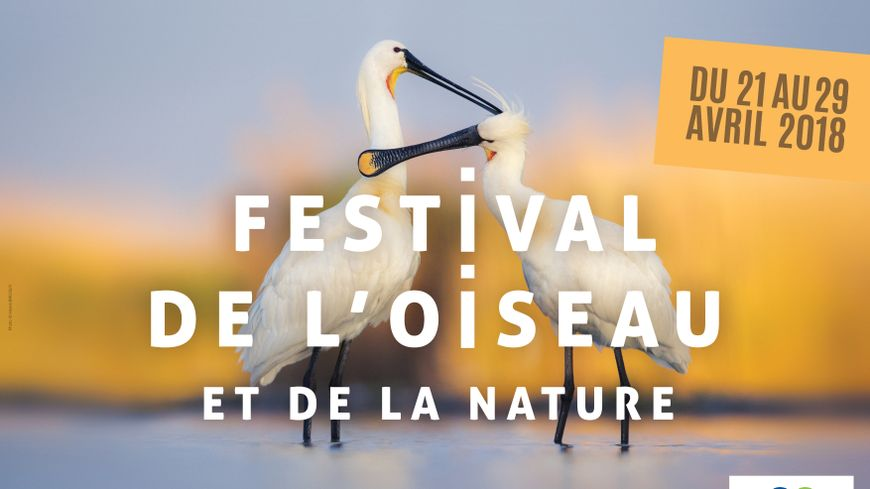 Poster of the event

4. Art and antiques festival, Antibes, southern France, 21st of April to the 8th of May

It's easy to see why the ancient city of Antibes, founded centuries BC and a favourite of Monet, Picasso and Renoir to name just a few, is an appropriate venue for one of Europe’s largest antiques and arts fairs.

The stalls, some covered and some open-air, will showcase jewellery, artworks and furniture, and the event has become popular with international traders and collectors. 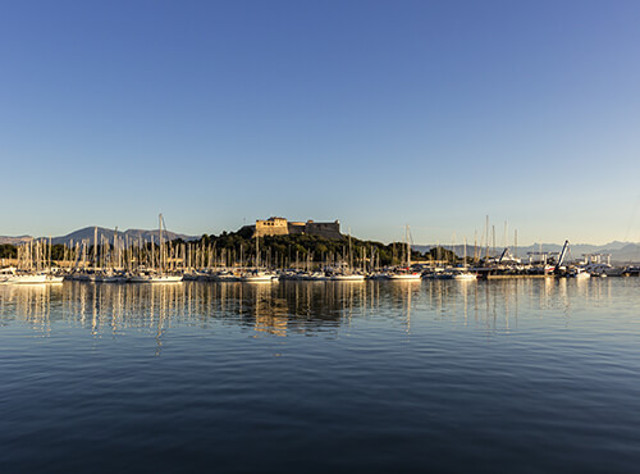 This music festival gets bigger every year; over six days, more than 100 artists will perform from a diverse range of genres, with concerts showcasing big names as well as newcomers.

Music industry professionals regularly recruit new talent at the Printemps du Bourges, so if you’re the type of person who likes to hear new sounds before they hit the charts, it’s a good chance to spot about-to-be-discovered stars.

And you can get reduced rates for public transport tickets between Bourges and Paris. 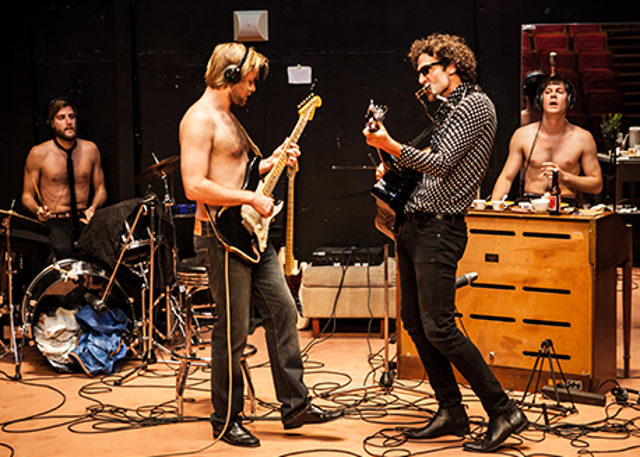 6. International Festival of Gardens, Château of Chaumont-Sur-Loire, Central France, From the 24th of April to the 4th of November

The 15th century Château of Chaumont-Sur-Loire opens its door from the end of April for all professional garden designers around the world to create unique pieces around the château.

The gardens are open to the public for 6 months so that tourists can see how each garden evolves during the seasons, Autumn being considered as the most beautiful time of all for the château.

You can have a walk by yourself or have a guide show you around to explain the gardens in more detail. 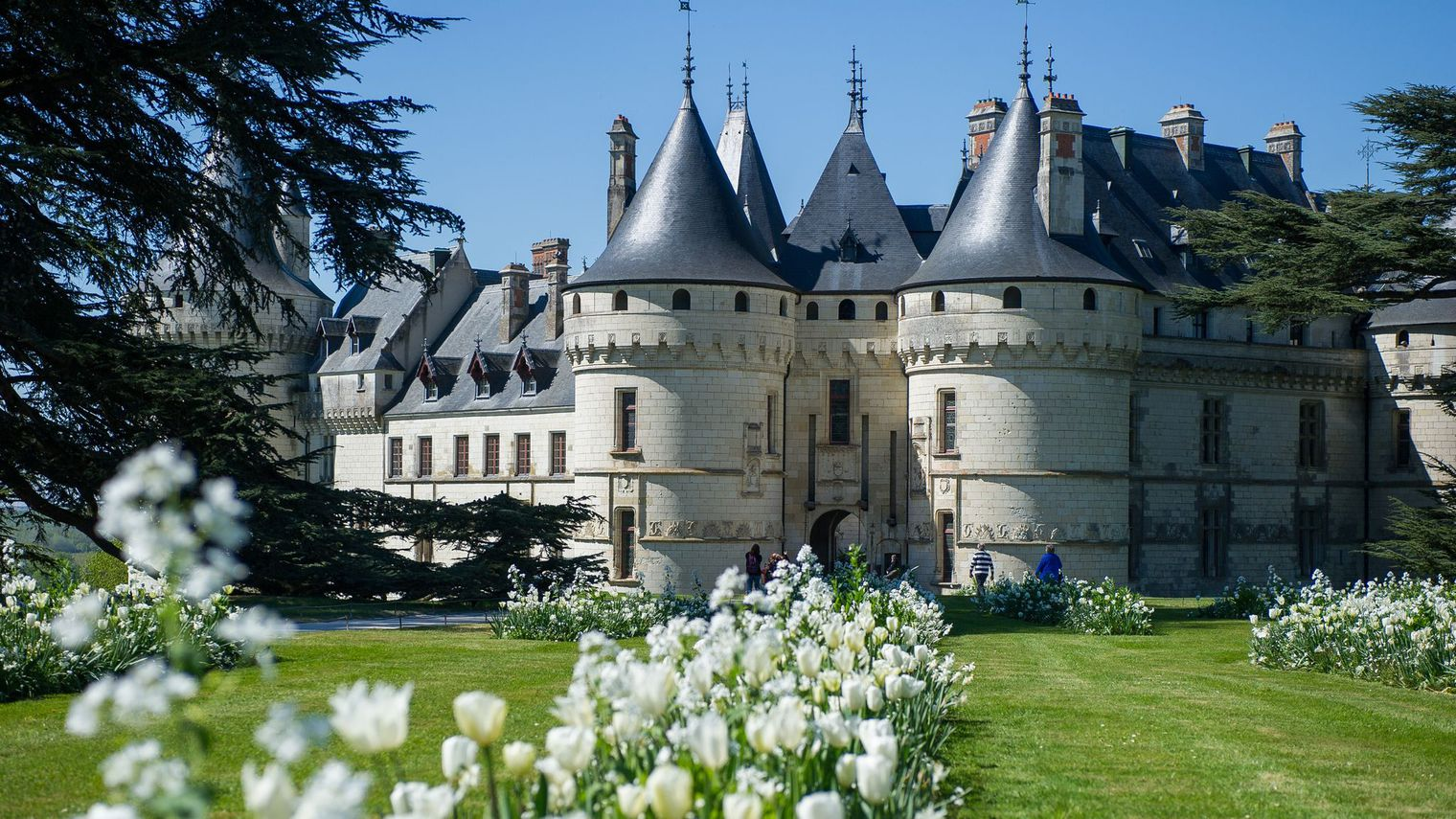 Now running for 114 years in Paris, the fair focuses on innovation in five different areas of our daily life: house and lifestyle, wellbeing, fashion and accessories, leisure, everyday life and regional wine and gastronomy.

Visitors can test all kinds of products, making it great for anyone looking to furnish a new home or just find out more about technology.

You can also find the tropical music performances and African and South American cuisine. 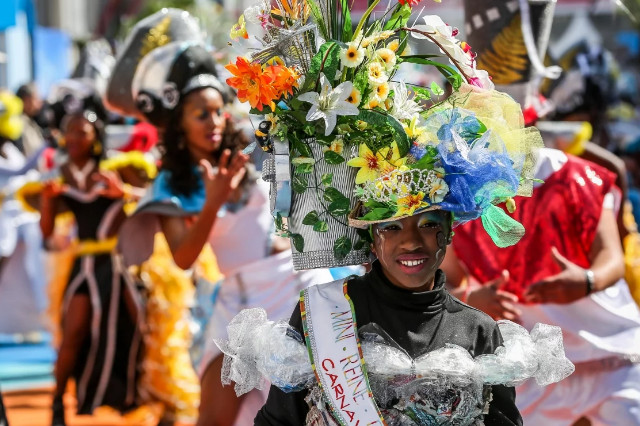 8. The Great Roman Games, Nimes, southern France, 28th to the 30th of April

If you sometimes feel like you were born in the wrong century, this historical reenactment gives you a chance to experience life in Roman times, in the atmospheric setting of Nimes' Roman amphitheatre.

This year's theme is about Spartacus, the famous gladiator who conducted a slave uprising against the Roman Republic.

You can relive the Roman games (without the bloodshed) with gladiatorial combat, chariot races and an enactment of the final battle between Spartacus and the Romans.

9. Jazz under the Apple Trees, Coutances, Northern France, the 5th to the 12th of May

In French, ‘Jazz Sous Les Pommiers’ is a music festival dedicated to all things jazz. With more than 400 professional musicians and 60 concerts, the Festival offers a wide range of jazz genre from classic to electronic jazz.

If you play an instrument yourself, why not try your hand at an open jam session? They is always one happening at the festival and it’s open to everyone.

Famous jazz musicians are also invited to this festival so be sure to book a ticket well in advance. 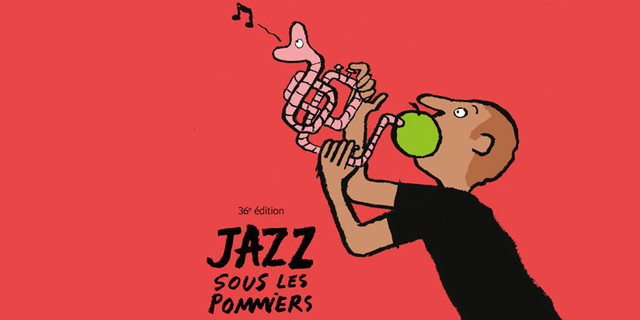 10. Nuits Sonores, electronic and indie festival, Lyon, 6th to the 13th of May

Electro music lovers take note. This year’s Nuits Sonore festival in Lyon promises to draw an intergenerational crowd as well as a superb programme of international and local artists with a rich mixture of styles. 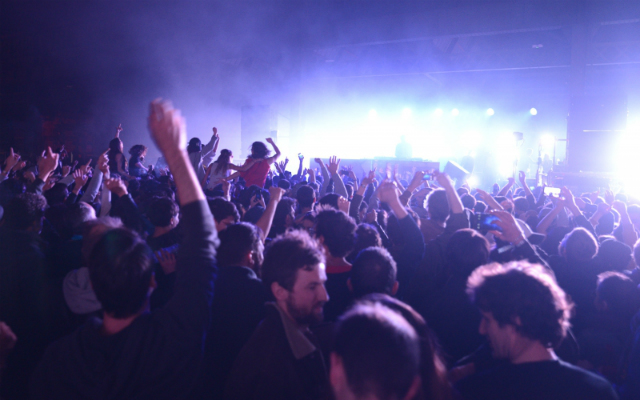 11. European night of the museum, May 19th, across the whole of France

On the evening of the 19th, museums across the whole of France will throw open their doors free of charge to visitors between 6pm and midnight. Most museums will also offer special activities such as concerts, workshops and screenings. 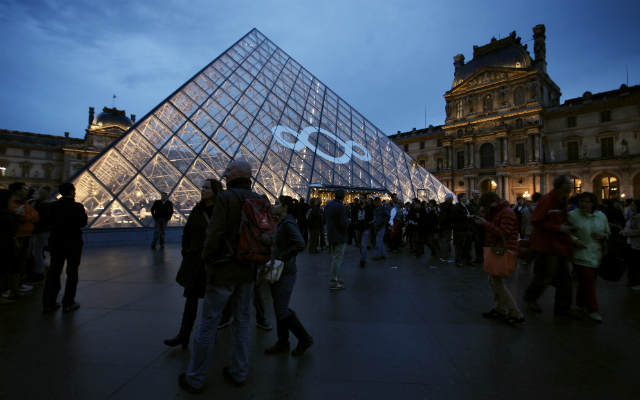 12. Festival du Sully et du Loiret, Loiret in Central France, 24th of May to the 17th of June

A classical music festival that is mainly held in the town of Sully-sur-Loire, near Orléans. The festival is on to its 45 year now and offers a vast range of concerts, from classical music, to jazz, to amplified music. All concerts are held in heritage sites such as the château of the Duc de Sully which adds to the whole atmosphere and makes the concerts really unforgettable. 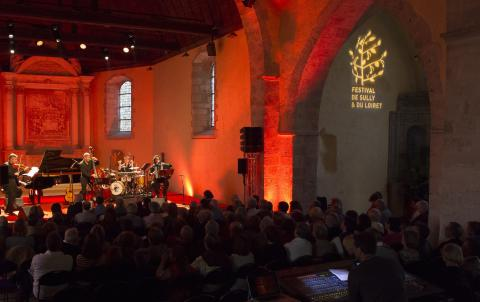 Thanks to poor plumbing and thin walls, French neighbours, especially in Paris, are infamous for their disputes. Yet since its launch in Paris in 2000, 'Neighbours Day' has become a global success, with people across the world seizing the opportunity to get to know the people living nearby, even if it might be the first time they have spoken all year.

If nothing else, it's a good excuse for a party and people across France will be organizing garden gatherings and aperitifs in the communal areas of their apartments or roads, so if you haven't already – get involved.

14. The Vitiloire Wine Festival, Tours, Loire Valley, the 26th and 27th of May

In 2003, the town of Tours in Central France decided to promote the wines and vineyards in the Loire Valley by organising a free entry festival dedicated to the wines of the region.

The festival has been growing ever since. This year, more than 150 vignerons will take part to showcase their product. There is much to do at this festival and, of course, much to taste. Activities include wine conferences, tasting, talks with chefs, gourmet cuisine making, wine markets and walks and bike rides organised to discover the Loire Valley and their vineyards.

A must-see for any wine enthusiast!

This year marks the 12th edition of the festival that began in 2007 to commemorate the anniversary of the Allied Landings in Normandy during the World War Two.

It marks an important part of France's history and the festival takes over the city with film screenings, historical walks, reenactments and theatrical performances, making this one of the best times to visit Normandy for history lovers. 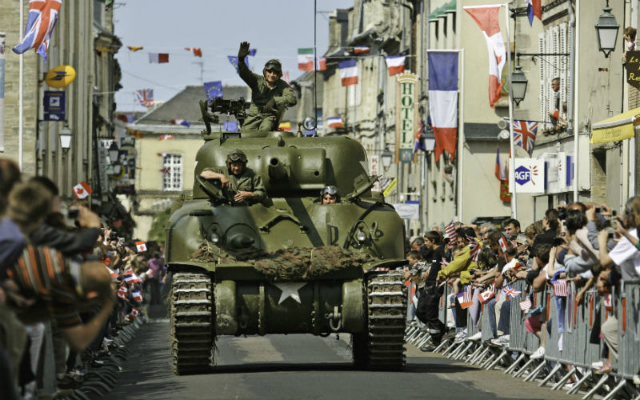 Located in the tiny medieval town of Charité-sur-Loire, this is a festival devoted to the celebration of words – whether spoken, written or sung. Over four days artists, writers and scholars alike will gather there to do just that in a series of workshops, exhibitions and readings. 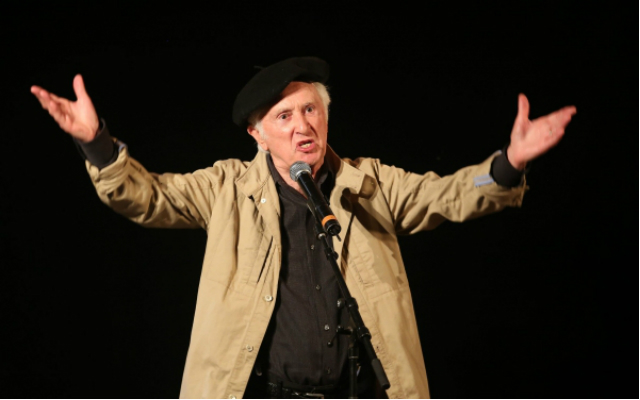 Since 1970, the Saint-Denis festival showcases classical music orchestras and recitals in Saint-Denis, a town North of Paris. The concerts are held in the beautiful Basilica of Saint-Denis or in the Maison D’Education de la Légion d’Honneur, a very old and prestigious French school.

Conductors from the whole world come to the festival and you will also find the Parisian orchestras of Radio France, playing Mahler, Mozart, Schubert and more. 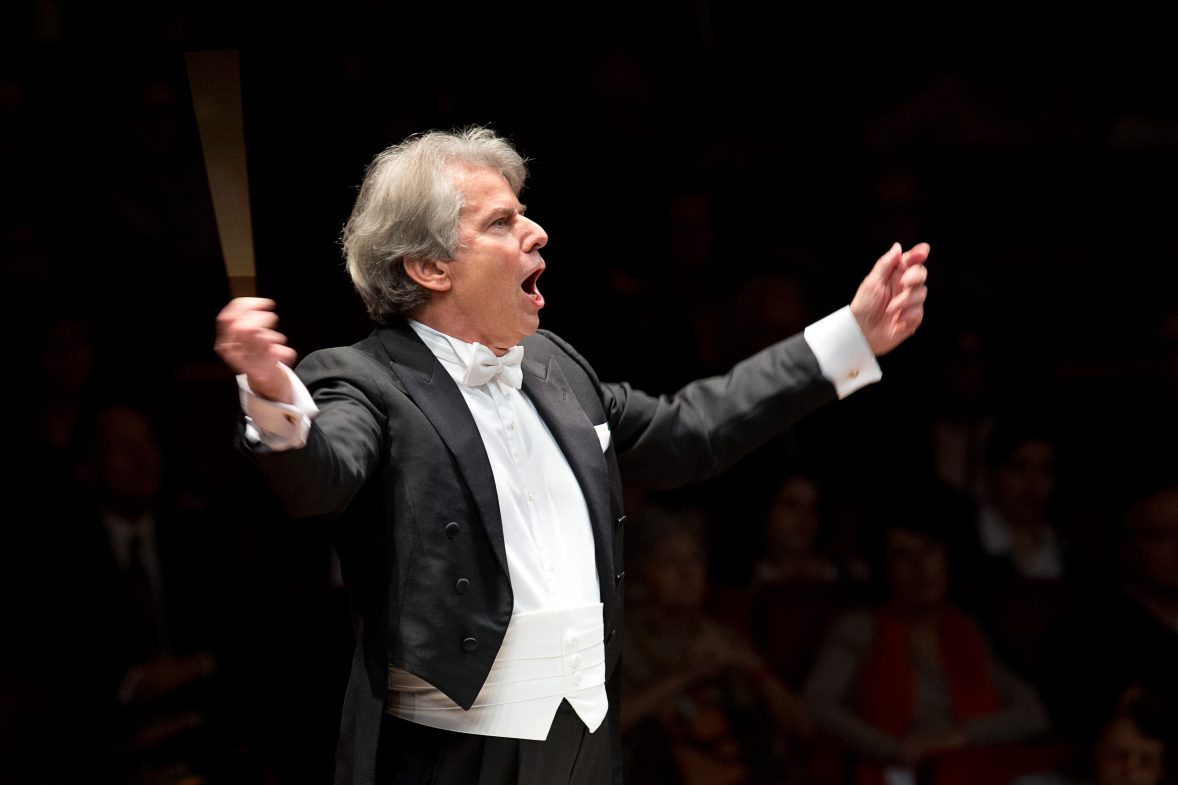 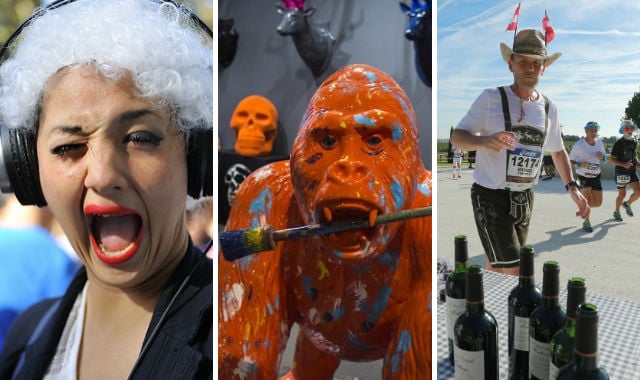 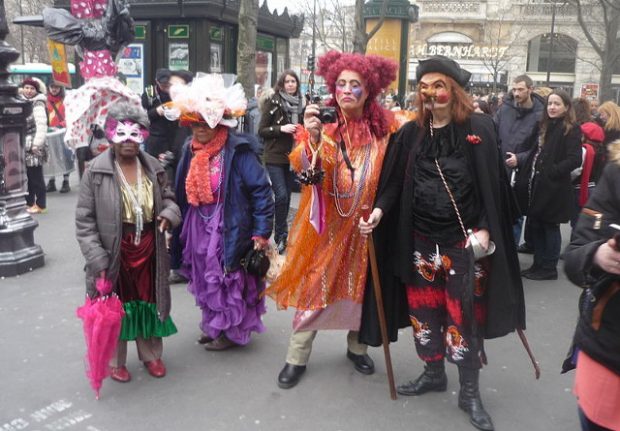 WHATS ON
What’s on in France: 12 great things to do in March 2018
Url copied to clipboard!