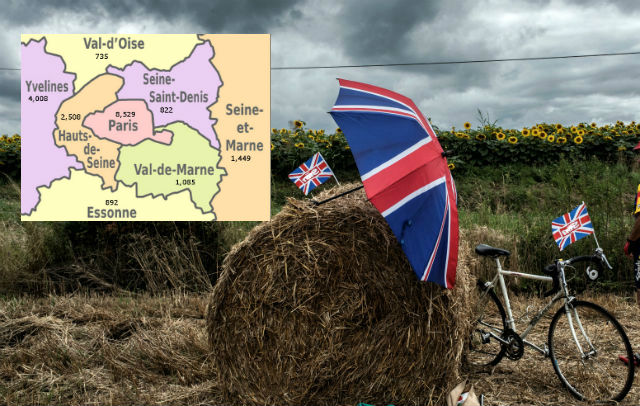 Data given to The Local by France's stats guardians at INSEE reveal a pretty uneven spread of Brits across France's departments. In all there are 153, 608, according to INSEE  although many suggest the real number is much higher.

While it may come as no surprise that there are plenty of Brits living in Dordogne, in south western France and in Paris, there are parts of the country where very few Brits set foot.

And the department with the least number of Brits living there is?

Ardennes, where according to INSEE's 2013 stats (the most available) only 38 reside (If you're one of them, get in touch!).

Finding a British national in the nearby department of Meuse will also be like looking for a needle in a haystack given that there are only 67 of them.

Saying in eastern France, there are only 48 Britons in the Territoire de Belfort and 67 in Haute-Marne (see map below). That means a whole corner of France is pretty much ignored by Brits. The answer for why so few head to eastern France is obvious, according to Joanna Leggett from the estate agent Leggett Immobilier.

“The number one factor for where Brits choose to go is the weather,” she says.

“In the west, they get around 2,400 hours of sunshine each year, but in the east, the temperatures are lower and they get a lot of rain,” Leggett told The Local.

“Places like the Ardennes are cooler and there is also not great infrastructure available in transport links to get them there,” she added.

Departments in eastern France can suffer from long winters which may put off many Brits from setting up there.

The map below shows where in France to go to find the sun and Ardennes in the north east is clearly not the sunniest place.

While Brittany and Normandy are hardly baked in sunshine all year round, they at least provide easy transport routes home, one of the reasons why these regions prove popular for Brits.

One area that Britons are also avoiding is the former region of Burgundy, where the departments of Yonne, Nievre and Côte d'Or and Saône-et-Loire are fairly sparsely populated.

Given the scenery, cuisine and great wine on offer, estate agents are baffled that there are not more.

“Burgundy used to be really popular but people just don't seem to be interested in it and I've no idea why. Perhaps they've just found other areas where the prices are better,” says Leggett.

READ ALSO: The seven myths about Brits who live in France Despite the offer of the sunshine the Mediterranean island of Corsica is home to low number of Brits, some 149 in total – 55 in Corse du Sud and 94 in Haute-Corse. Transport links and costs appear to be the main issue with Corsica.

So where do all the Brits live in France?

Let's zoom in on the most populous area of France – in general and for Brits. Paris, perhaps unsurprisingly given it's the capital, which means jobs and infrastructure, was home to the most Brits with 8,529.

The surrounding departments saw high British populations as well, particularly Yvelines to the west with just over 4,000.

It appears that Brits love the west of France too, with thousands calling Brittany and Normandy home. The northern Brittany department of Côtes-d'Armour is particularly popular with 4, 813 Brits residing there. Here's a look at the southern half of France in general. Scroll down for a closer look. Below is the south west of France, which contains the ever popular Dordogne with 7,316 Brits. That's only around 1,000 fewer Brits than are in Paris.

Nearby Charente is also extremely popular, and Haute-Vienne isn't far behind. As for the south east, below, Haute-Savoie and its 4,069 Brits is worth a notable mention, as is Ain and its 3,108 Brits and Alpes-Maritimes, which includes the French Riviera, home to 5,927 well-tanned Brits..

The rest of the departments are less popular. And for good measure here's a map for the whole of France.