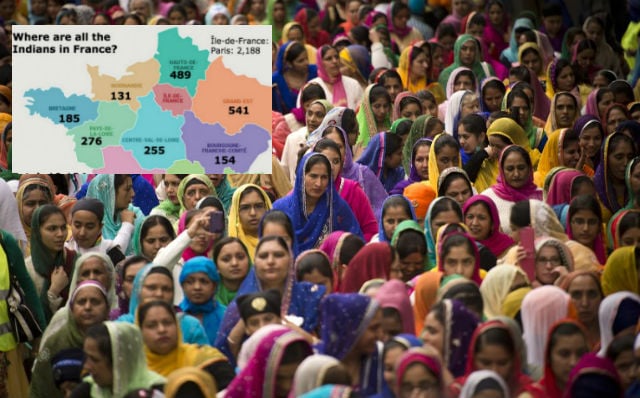 Photo: AFP/ The Local (Indian Sikhs watch a procession in Bobigny, near Paris)

Did you know there are over 19,000 Indian nationals officially living in France?

That is, at least, according the latest stats given to The Local from National Statistics Agency Insee. However one previous study put the figure at 27,700 including some 15,000 who had become naturalized French citizens.

The number of Indians in France could also grow given that French governments have made efforts to attract more Indian students to its universities. Indeed by 2020 the hope among authorities is that as many as 10,000 international students from India had to France each year.

That same study said the Indian population in France and indeed those from other south Asian countries are “among the least known components of France’s social mosaic.”

The Insee figures, compiled in 2014, offer a good insight into where people from India can be found in France. So here’s a closer look, starting with a glance across the country followed by a region-by-region breakdown.

There are 19,134 Indians officially registered in France. The top area is The Greater Paris region of Île-de-France, where there are just over 14,000 Indians, 2,200 of whom live in the city of Paris. The top department is Seine-Saint-Denis to the north east of the capital, which is home to just over 5,000 Indian nationals.

And the least popular department?

Well while Indian nationals are present in every department in France there are five which just have a solitary Indian national living there: Haute-Saöne in Bourgogne-Franche-Comte, Vosges in the east, Correze in central France, Cantal in the central Auvergne area and northern Corsica.

This is by far the most popular region for Indians, with 14,100 of France’s 19,000 Indian citizens calling it home (74 percent). This is an outlier compared to all other Anglophone expats. Among the other seven nationalities we looked at an average of 20 percent live in the region of Île-de-France.

Another statistic that separates the Indians from other Anglophones is the likelihood that they live in the suburbs outside of Paris, rather than in Paris itself.

Indeed, only 2,200 Indians live in the city’s 20 arrondissements, or just 16 percent of the total number of Indians in Greater Paris. This compares to 60 percent for Australians and around 40 percent for Brits and Americans.

The most popular department for Indians is by far Seine-Saint-Denis in the suburbs to the north of Paris. Some 5,002 Indians call it home. The suburb of Bobigny in Seine-Saint-Denis is home to what is considered to be the the biggest temple in France. The images below were taken in Bobigny during celebrations for Vaisakhi, the Sikh New Year Festival.

This is what a study about where Indians and citizens of other south Asian countries are living in France.

“The spatial implantation of South Asian immigrants is characterized by its extreme geographic concentration on French territory.

“With the exception of a few locations in the provinces (Strasbourg, Bordeaux, Lyon, Toulouse, Marseille), linked to a student presence and the opening of Indo-Pakistani restaurants, the vast majority of South Asians live in Île-de-France (mainly in Seine Saint-Denis and Val d’Oise) or nearby (in the Oise and Eure).

“Neighborhoods with a strong South Asian population have developed, such as La Courneuve, Sarcelles, Dreux and Creil and commercial enclaves, which help to reduce the invisibility of these populations.” The other departments in Ile de France

Exactly 2,000 Indians live in Val d’Oise, the second-most popular department, followed by 1,400 in Essonne, 1,330 in Hauts-de-Seine, and 1,100 in Val-de-Marne. Another 1,000 Indians are split fairly evenly between Seine-et-Marne and Yvelines. (The Ile de France map of Indians in France.)

So while Île-de-France is where most Indians are found, here’s a look at where else in France a much smaller number of them live.

Some 255 Indians call this region home, a far cry from the popularity of the Paris suburbs despite its relative proximity. The most popular department is Eure-et-Loire with 94 Indians, and the least popular is Indre with just nine.

This region is home to just 154 Indian expats, compared to the 3,813 Anglos in the region. Most departments have a few dozen Indians but we reserve a special shoutout to the solitary Indian living in the department of Haute Saone. The department where you’ll most likely find someone from India is Yonne which is home to 38 Indians.

This region is home to 131 Indian expats, with Seine-Maritime the most popular department at 43. Calvados is not far behind at 42.

There are 489 Indians in this region in the north, most in the department of Nord (231), followed by Oise (187). The other three departments can claim 70 more Indians split fairly evenly between them.

In the east of France, you will find 541 Indians. Most are in Bas-Rhin (255). Spare a thought for the solitary Indian in Vosges, too!

Interactive map: These are the ‘best’ places to get a curry in France There are 276 Indians over the five departments in this western region. By comparison, there are 7,313 Brits so they’re well and truly outnumbered. Loire-Atlantique with 188 Indians is the most popular.

In the north west you can find 185 people from India, an incredibly small amount compared to the 14,581 Anglos out there. The Indians are spread out over the region’s four departments, ranging from 117 in Ille-et-Vilaine to just 12 in Cotes-d’Armor.

In the south eastern reaches of France you can find 43,833 Anglo expats, just under 300 of whom come from India. Gironde with its 130 or so Indians is the most popular. The other 11 departments range from 1 in Correze to 13 in Dordogne, which, for the record, has a whopping 7,285 Brits.

There are 13 departments in Occitanie and 545 Indians. The winner, in terms of total Indians, is Haute-Garonne with around 300. Other notable numbers include the Lot and Gers departments (with just 2 Indians each).

This region has 12 departments and 1,127 Indians – the most in any region besides Ile de France. They’re mostly findable in the department of Isere (427) and Rhone with 343. A big hello from us here at The Local to the one Indian in Cantal – hope you’re enjoying the local cheese down there.

In the sunny south of France you’ll find 879 people from India. They’re mostly in the Alpes Maritimes and Bouches-du-Rhone, which makes up almost 800 of the local Indian population.

Lastly, there are just three Indians in Corsica. There are two on the south island and one on the north.

Indians in France, if you have any issues you’d like us to write about please get in touch