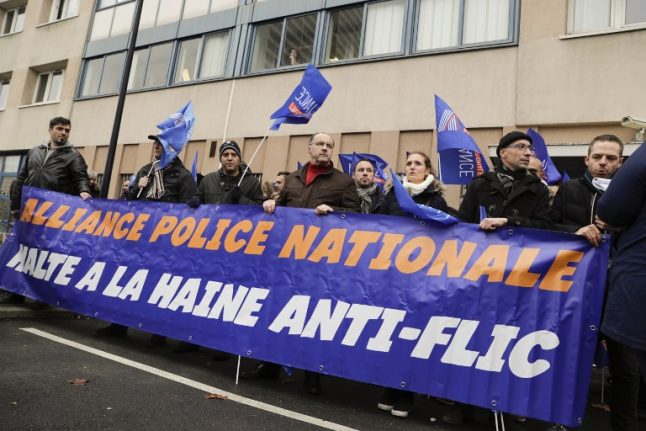 Members of the Alliance Police Nationale union gather for a protest outside the police station of Champigny-sur-Marne. Photo: AFP

The government vowed to crack down on urban violence after the attack, which occurred after the officers became separated from the bulk of the force intervening to halt a party in Champigny-sur-Marne, east of the capital.

They had had been called to clear 300 to 400 people attempting to see in 2018 at an unauthorised warehouse party.

Footage that soon went viral showed the 25-year-old policewoman writhing on the floor as she was kicked by the crowd, as well as revellers flipping over a car.

The 14 people arrested, aged 16 to 20, are suspected of striking the officer, filming the scene or not aiding a person in danger, police sources told AFP.

During searches of their homes, some suspects were found with clothes worn by people seen in the video of the attack, and a pellet-filled grenade which police suspect was taken from the scene, sources close to the inquiry said.

Some of the suspects were known to security forces.

“All those responsible have been arrested,” Interior Minister Gerard Collomb told LCI television.

The policewoman's fellow officer, a 48-year-old captain, had his nose broken after being punched in the face, but the assault was not filmed, and investigators have not found his attackers.

The incident prompted an outcry over violence against the police, along with demonstrations by officers calling for more resources and tougher penalties for delinquents.

An estimated 5,767 officers were wounded in the line of duty in 2016, according to a justice ministry report.

Shortly after the attack, Collomb had called for reforms to improve lives in “impoverished, ghettoised” French suburbs, which have long suffered a reputation for violence and poverty.

France has since introduced new pilot schemes in local policing, part of a raft of policies announced by President Emmanuel Macron to fight poverty in downtrodden and high-immigrant districts.

Tensions routinely flare on New Year's Eve, when youths in many poor neighbourhoods across the country set fire to hundreds of cars, leading to dozens of arrests.