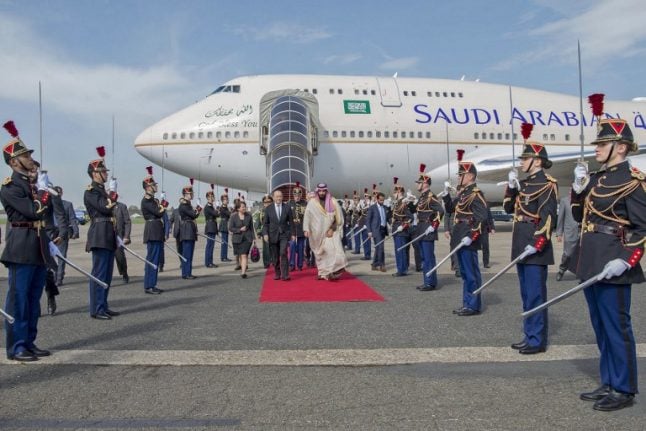 The dinner, which had not been listed on the president’s official agenda, was held shortly after the prince arrived in Paris on the latest stage of his weeks-long charm offensive that has so far taken him to the United States, Britain and Egypt.

The Louvre was the latest prestigious historic site chosen by Macron to host and impress foreign heads of state, following Russian President Vladimir Putin’s reception at the Versailles chateau and US President Donald Trump’s dinner with his French counterpart at the chic restaurant in the Eiffel Tower.

Elysée officials noted that the meal in the Louvre coincided with the launch of the major exhibition of the 19th-century French painter Eugene Delacroix, best known for his work “Liberty Leading the People”.

Delacroix’s painting of Parisians being led over the barricades by a bare-breasted Liberty during the July Revolution of 1830 is one of the most iconic in art, and was used on the cover of the 2008 Coldplay album, “Viva la Vida”

Prince Mohammed’s official visit to to France, which lasts until Tuesday, will include another dinner with Macron on Tuesday, but this time at the Elysée palace.

The prince was expected to sign a “strategic partnership” with France, which is hoping to profit from the prince's economic and social shake-up of the oil-rich kingdom.

The 32-year-old is considered the de facto Saudi leader and has recently led a modernising drive in the strictly religious kingdom, which includes allowing cinemas to open and women to drive.
Url copied to clipboard!