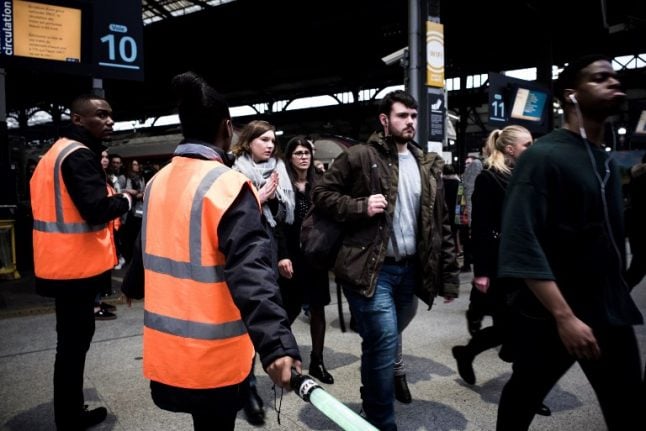 Workers have pledged two days of stoppages every five days to protest the government's planned overhaul of the operator, which has caused losses of “some 20 million euros per day”, Pepy told BFM television.

Pepy said the the disruptions often spill into non-strike days.

Rail workers began their strikes on two out of every five working days last week to protest the government's planned overhaul of the operator.

The strikes are set to run until the end of June.

Services have been badly hit by the strike each day.

On Monday around one in five high-speed TGV trains was running whilst no Ouigo trains – low cost TGV services – were operating.

France's regional TER trains were running a third of the usual services but the Intercité trains were badly hit with only one of six trains running.

In Paris the RER commuter services were once again hit with only one out of five trains running on the RER C whilst the RER B, which links Paris to the airports, was reduced to a third of the usual services.

The Eurostar was running three-quarters of its normal services while other international trains to Spain and Germany were running at only between a third and fifth of usual services.

Pepy noted “quite heavy participation” for the strike on Monday, “though there are more trains than last time”, a reference to the stoppages last week.

“From what I can see, France has not been paralysed,” Pepy said, “but clients are being heavily penalised.”

Under the reform plan, new hires would be denied the jobs-for-life and early retirement guarantees enjoyed by current rail employees, and the SNCF would be transformed into a private company whose shares are owned by the state.

The government has insisted it won't back down, while unions claim to have broad public support, with more than 510,000 euros pledged to a fund set up to compensate lost wages for striking workers.

President Emmanuel Macron, who has not spoken on the conflict publicly since it started, plans to give an hour-long televised interview at midday on
Thursday.

Macron will also address the strike during a two-hour primetime interview Sunday with BFM television and the investigative news website Mediapart.

Parliament is scheduled to begin debating the government's overhaul on Monday, though Macron has said he will implement the changes by decree in order to move quickly ahead of the opening of French passenger rail traffic to competition starting in 2020.

Monday's strike is scheduled to end at 8:00 pm (1800 GMT) before resuming for another two-day stoppage on Friday.