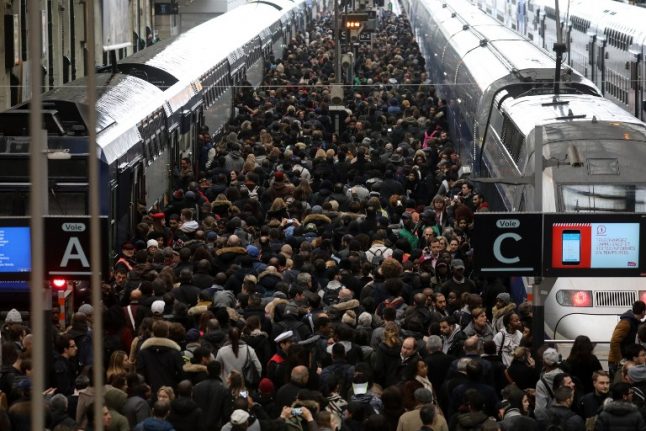 Commuters wait on a crowded platform at Gare de Lyon in Paris on a strike day. Photo: AFP

More than 15,500 people have contributed to the kitty via the fundraising website Leetchi since it was set up on March 23, before the first of the rolling two-day strikes began last week.

A total of €527,285 had been collected by Monday at midday, with the figure rising several thousand euros by the hour.

“When I was young, we used to organise collections for local workers on strike,” said Jean-Marc Salmon, a sociologist who launched the online fundraiser. “I simply wanted to rehabilitate this practice using the internet.”

The money will be distributed to the various unions participating in the strike in proportion to their representation among SNCF workers.

The hardline CGT will get the biggest share, 34 percent, and will then distribute the cash to striking workers to make up for the pay they lose when they walk off the job. Unsa-Ferroviaire union will get 24 percent and Sud-Rail will take 17 percent of the fund, with the rest being distributed to a range of smaller unions.

“I unreservedly support the rail workers in their defence of public service,” wrote one donor on the Leetchi site, which allows contributors to leave comments when they pay in.

When The Local spoke to rail passengers affected by the strike many were supportive.

“I completely agree with the rail workers and the reasons behind what they're doing,” Hamet Sylla, whose train from Gare du Nord had been delayed for five hours, told The Local.
“It's absolutely vital to protect your rights and keep on fighting those trying to take them away. And the disruption to our day might be annoying but this is part of living in a society where you have the right to protect yourself.”

The strikes, which began on April 3rd and are set to run until the end of June, have cost the SNCF around 100 million euros so far, the operator's chief executive Guillaume Pepy said on Monday.

Workers have pledged two days of stoppages every five days to protest the government's planned overhaul of the operator, which according to Pepy have caused losses of around 20 million euros per day.

On Monday around one in five high-speed TGV trains was running whilst no Ouigo trains – low cost TGV services – were operating.

France's regional TER trains were running a third of the usual services while Intercité trains were badly hit with only one of six trains running.