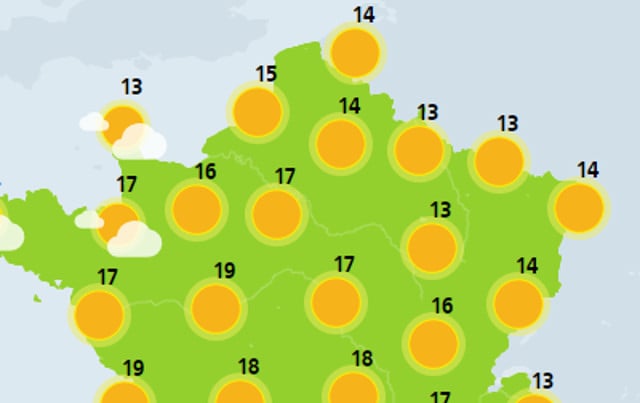 Map: Meteo France
France will enjoy its warmest day of the year on Friday with the mercury reaching levels more akin to mid May than early April.
Temperatures are set to double within 24 hours in some parts of the country which means spring is finally here.
On Friday, the sun is set to shine almost everywhere in France and in many places temperatures are expected to be above the average temperatures of the season, according to France's national weather agency Meteo France.
That means that in some places in France, the temperatures will double (or almost) in 24 hours. France weather map for Friday 2 pm – 5 pm. Meteo France
In Paris, temperatures will soar to highs of 20C on Friday afternoon.
In Lille, for example, the mercury will shoot up to 17C on Friday afternoon after people in the northern city experienced a chilly 9C just a day earlier. Elsewhere in the country, with the exception of the tip of Brittany and the shores of the Mediterranean, temperatures will rise by 5C to 8C degrees. France weather map for Friday 5 pm – 8 pm. Meteo France
On the French Riviera, the morning is set to be cloudy but the sun will break through in the afternoon.
However there will be some showers around the Garonne river in south west France and Toulouse and its surrounding area can also expect wind.
And the really good news is that this time it looks like the higher temperatures are here to stay.
The mercury is set to remain high across the country on Saturday, with highs of 19C in the greater Paris region of Ile-de-France and 21C in the French Alps, although rain is expected to hit the western parts of France.
Meanhile temperatures are expected to drop — but just slightly — in most of France with rain forecast for much of the west coast, central regions and the French Riviera.