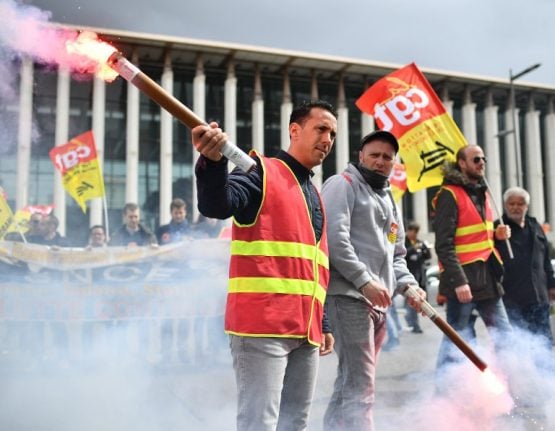 Workers hold flares during a rally called by the French trade union the General Confederation of Labour (CGT). Photo: AFP
French Prime Minister Edouard Philippe said Thursday the government would not budge on its plans to shake up state rail operator SNCF after two days of train strikes that snarled rail traffic across the country.
Trains were operating “almost normally” on Thursday as rail workers resumed service after the first instalment in a three-month rolling strike, seen as the biggest challenge yet to President Emmanuel Macron's reform agenda.
“I can confirm that we are determined to pursue this reform,” Philippe told France Inter radio, saying it was necessary “to ensure the efficient operations and quality of the SNCF.”
But unions claimed they were gaining support for their challenge to plans to phase out the guaranteed jobs for life and early retirement currently enjoyed by rail workers.
READ ALSO: Under the government's plan, new hires at the debt-ridden SNCF would no longer have right to these benefits.
It would also turn the SNCF into a corporate entity whose shares would be owned by the state — a move unions see as a first step toward privatisation, despite the government's denials.
A poll last Sunday by the Ifop survey group found that 46 percent of respondents found the strike “justified”, with a slim majority of 51 percent saying the government “should complete the reform as it has been announced”.
“I'm convinced that we have public opinion on our side, and that train users support us,” Laurent Brun, head of the train branch of the CGT union told CNews TV.
Organisers of a support fund for striking workers, meant to compensate their lost wages, claimed late Wednesday that more than 220,000 euros ($270,000) had been raised from some 6,500 donators.
Analysts have warned that support for the strikers could grow the longer it goes on, with unions vowing to down tools two days out of every five for the next three months.
'We might be next'
For Guillaume Durand, a transport specialist at Paris-based consultancy Wavecom, support for Macron's attempts to make the SNCF more competitive could founder on a growing wave of social discontent.
Students are blocking campuses to protest more selective entry requirements for universities, while energy workers, garbage collectors and Air France pilots — who are seeking a six percent raise — are also striking.
“We could have a movement that gains momentum, including more than just the SNCF,” Durand told AFP.
“Everybody is pointing to this and saying 'Watch out, we might be next on the list so let's take action',” he said.
“I think we're looking at a movement that's going to be fairly serious, where the outcome is very clearly far from certain.”
Union leaders want the strike actions to converge in a repeat of huge 1995 strikes against pension reforms which crippled the country for weeks, eventually prompting the government to back down.
Some are even hoping for a re-run 50 years later of the famed May 1968 anti-government demonstrations by students and workers, which marked the beginning of the end of Charles de Gaulle's presidency.