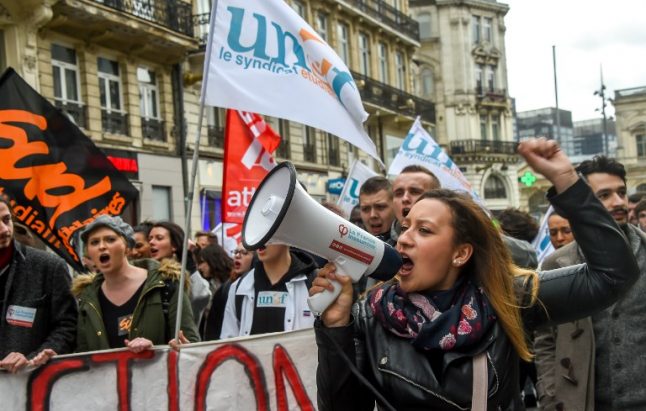 “May 68. They are commemorating, we are starting again”, reads a slogan recently tagged onto the statue at the iconic Place de la République square in central Paris, which is so often the hub where protesters and strikers gather.

The graffiti is not just wanton vandalism and could be a word of warning to the French government.

Nearly 50 years ago in May 1968, student protests over the education system flared up into nationwide confrontation and turned into one of the greatest upheaval in modern day France.

This week, student demonstrations over new tighter university admissions rules appeared to be headed in the same direction, as several hundred students in the universities of Lyon, Lille, Strasbourg and Bordeaux joined ranks with France's railworkers as they staged a second day of strikes.

This move came as ten out France's 73 universities including Montpellier, Toulouse, Bordeaux, Nantes, Rouen, Lille, Strasbourg, Nancy, Nice and several Paris universities were closed or had classes disrupted this week as students staged sit-its and barricaded the doors in protest against government reforms, which critics say threaten France's tradition of education for all.

The student demonstrations come at a time of social unrest in France, as rail workers begin three months of rolling strikes that have crippled train services and the energy and the waste sectors are also hit by industrial action. Not to mention Air France staff who have also announced a series of April strikes.

In other words President Emmanuel Macron is facing his biggest challenge since he was elected last May. As France commemorates the 50th anniversary of May 68 next month, there is talk of whether the country is ripe for a repeat.

“In April 2018, just like the graffiti written at “La République”, many still believe in the convergence of the social struggles of today's student protest and those of the railworkers and others in the public sector,” wrote Liberation newspaper.

“Between the student unrest and the railworkers anger, there is a climate of social unrest in France which is bringing back some memories,” writes France's Huffington Post. It points to a recent YouGov poll in which a majority of French people hope to see the current protests develop in a similar way to the uprising that rocked France in 1968.

But while the protests appear to be growing, any comparison with the student protest of May 1968 must be taken with caution, according to political analyst Bruno Cautres.

“May 68 occurred in a very different context, from a political, European and global perspective as well as from that of the trade unions,” Bruno Cautres told The Local.

“The student protest at the time was cultural, it was about what sort of society they wanted to live in. Today, the youth protests are more about practical and financial concerns (such as university admissions and ability to get work), and these matters are no doubt more important to them then they were in May 68,” said Cautres.

Protests started simmering at the end of last year when teachers and researchers, called on to help define the criteria for ranking students entering university, refused to apply the new rules and organised a number of small demonstrations in February.

On March 22, the protests took on a more sinister turn when hooded men armed with bats stormed a lecture theatre in Montpellier university to break up a student sit-in. Three students were injured and a professor and the university's dean, who has since stepped down, were charged over the affair. Since then, tensions between supporters and opponents of the protests have sharpened. In France, students can apply for any university course as long as they pass their Baccalaureate, the final exam of secondary school. With lecture halls bursting at the seams and over a third of students dropping out in their first year of university, Macron's centrist government has sought to tighten standards.

Starting this year, universities can set basic requirements for admission to three-year degree programmes. Students who do not meet the criteria will be offered a place on condition that they agree to take extra classes. Opponents argue that the restrictions are elitist and penalise students from poorer backgrounds.

As end-of-the-year exams loom, the protests have caused frustration on some campuses, with students in Montpellier insisting on their “right to study”.

In Nancy however, the president of Lorraine university said that some exams may have to be pushed back if classes have not resumed by next week, according to Le Monde. Students in Montpellier have called for another day of strikes on April 14.

The protests looked set to continue. Several unions voted this week to continue blocking the entrance to universities and their campuses, including at the Sorbonne, in Paris, where unions voted to block off its Tolbiac campus, used by up to 12 000 students daily, for an unspecified length of time.

“Today's youth doesn't necessarily believe that a vote is the only way or even the best form of public expression,” explained Cautres.

“Protesting and contesting are always a potential political option for youth people, and that's a good thing for the vitality of our democracy,” he added.