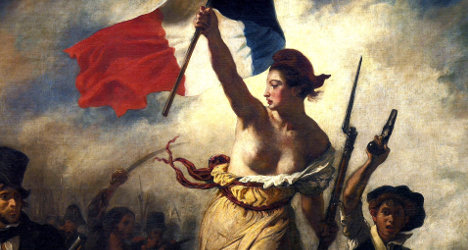 His painting of Parisians being led over the barricades by a bare-breasted Liberty during the July Revolution of 1830 is one of the most iconic in art, and was used on the cover of the 2008 Coldplay album, “Viva la Vida”.
The stirring tableau is also said to have inspired Victor Hugo's masterpiece “Les Miserables”, with the boy holding two pistols on the right of the picture said to be the model for the street urchin Gavroche.
But curators who have put together the huge exhibition at the Louvre, which holds the world's largest collection of Delacroix's work, said the bourgeois painter was hardly a revolutionary firebrand.
“There is much people do not understand about Delacroix's career,” said its co-curator Sebastien Allard. “He does not easily fit into any single movement.”
He said the show he has put together with his colleague Come Fabre — which will travel to the Metropolitan Museum of Art in New York in September — attempts to demonstrate the artist's huge range, from large-scale historical subjects to religious and Orientalist themes, and from animal paintings and intimate drawings to still lives of flowers.
Manic diarist
Although his “protean genius set the bar for virtually all other French painters” who followed him, his greatest creative period was actually quite short, Allard noted.
Delacroix's most famous and dramatic works — the “Massacre at Chios” (1824), the “Death of Sardanapalus” (1827) and “Liberty Leading the People” — all date from the first decade of his career. Photo: AFP
Allard said the tension characterising Delacroix's work reflects that “on the one hand he wanted to be original and the other wanted to fit in with the grand tradition of Flemish and Venetian artists of the 16th and 17th centuries.”
Delacroix was also probably the great artist who wrote the most, consigning his innermost thoughts about his work and his private life to a series of diaries.
In them we learn of his attraction to the writer Georges Sand and his fears about the progress of the tuberculosis which dogged the latter part of his life.
After two decades of only intermittently keeping a diary, he threw himself back into it in 1846 only to lose his entire journal for the momentous year of 1848 — when revolutions shook Europe — in a taxi.
That did not, however, stop him keeping a journal religiously to the end of his life in 1863.
Delacroix, who never married, also attempted to compile a dictionary of art and translated work by Dante, Byron, Goethe and Shakespeare.
“Eugene Delacroix (1798-1863)” runs at the Louvre until July 23 and then from September 17 until January 6, 2019, at the Met in New York.
Url copied to clipboard!