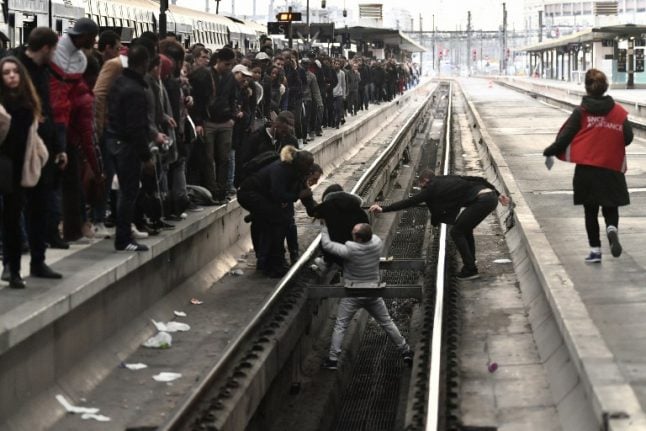 A woman needs help to get back on to the platform at Gare de Lyon where platforms were packed. Photo: AFP

The strike will cause chaos for France's 4.5 million train passengers, with stoppages planned two days out of five until June 28 unless Macron drops his bid to force a major overhaul at state rail operator SNCF.

All train services were severely hit, with some lines closed entirely. Only one in eight high speed TGV trains were running.

On Monday the government's transport minister Elisabeth Borne said the unions were to blame for causing the travel chaos.

“Rail users don't understand the reasons for this strike,” she said.

“No one can understand how half way through a consultation period the unions refuse to move. They want a long movement but I am ready for dialogue,” she said. Staff at Air France, garbage collectors and some energy workers are also staging separate walkouts Tuesday in a growing atmosphere of social strife 11 months after Macron came to power.

Pensioners, students and public sector workers have already taken to the streets in recent weeks protesting against the 40-year-old centrist's widespread reform plans.

Three out of four Eurostar trains to London and Brussels were running on Tuesday and the Thalys train towards Belgium and the Netherlands will operate almost as normal, but there will be none at all towards Spain, Italy and Switzerland.

Only a fifth of regional trains were running — and as commuters took to the roads instead, the streets of Paris were snarled with 370 kilometres (230 miles) of jams in the morning, “exceptional for the time of day”, according to traffic website Sytadin. Some commuters took precautions on the first of two days of strikes this week.

Farid Hachelef, a 32-year-old who works in construction, said he had spent the night in Paris with a friend rather than trying to travel in from the northern suburb of Argenteuil, “otherwise, I would never make it.”

At the busy Gare du Lyon station in Paris, the platforms were so crammed that a woman fell onto the tracks and had to be helped out by fellow passengers (see photo above).

Many workers were already forced to change their travel plans on Monday evening when the strike began.

“We are flying to New York and the strike has completely overthrown our plans,” Sophie Martin, 46, told AFP at the main station in the southern city of Lyon.

“The train strike is inadmissible. It's too easy to take people hostage,” fumed her husband Olivier, 50.

Others, however, were more supportive of the protesters including pensioner Alain Lyothier, 67, who said he “understands the strikers”.

Rubbish collectors, some staff in the energy sector and Air France employees will also strike Tuesday in the biggest wave of industrial unrest since Macron's election last May.

“We're bracing for a very strong mobilisation, with a heavy impact on train passengers,” a government source told AFP on condition of anonymity.

“Facing that, it's up to us to ensure we stick to the course.”

The rail strikes, set to last until June 28, are being seen as the biggest challenge yet to 40-year-old Macron's sweeping plans to shake up France and make it more competitive, earning comparisons with Margaret Thatcher's showdown with British coal unions in 1984.

(The calendar below shows the days hit by strikes in France. Blue is for rail strikes and those days with a red mark underneath are when Air France staff are striking.) Air France, meanwhile, is set to operate 75 percent of flights Tuesday as staff stage their fourth strike in a month seeking a six-percent pay rise.

While not linked to Macron's reforms, the Air France walkouts — also planned for April 7, 10, 11 — add to a febrile mood among France's unions.

“We need to rid this country of its strike culture,” Gabriel Attal, spokesman for Macron's Republic On The Move (LREM) party, told France Inter
radio on Monday.

It is 30 percent more expensive to run a train in France than elsewhere in Europe, according to his government, which wants to strip new SNCF hires of special rail workers' status guaranteeing jobs for life and early retirement.

They fear that plans to turn the SNCF into a publicly listed company, even with the state owning 100 percent of shares, could eventually lead to the rail operator being privatised — something the government denies.

The rail strikes are being seen as the biggest challenge yet to Macron's sweeping plans to liberalise the French economy and make it more competitive. Political expert Philippe Braud said Macron could succeed in reforming France where previous presidents have failed by methodically taking on one reform after another.

With opinion divided between “resignation” and “deep conviction that things must move forward,” Braud said, “the planets were aligned: So many reforms have been aborted over the past 20 years”.

The government has so far had public opinion on its side over the rail reforms.

“No one can understand why the rail unions are unleashing a long and punishing strike when the government is engaging in a dialogue,” said Transport Minister Elisabeth Borne, stressing the process is open to consultation.

But an Ifop survey on Sunday showed sympathy growing for SNCF staff, with 46 percent backing the strike, up four points from two weeks ago.

“France is tired,” said an editorial in the regional Sud-Ouest newspaper.

“Who will get tired the quickest? The trade unions clinging to their last bastion? Or the ambitious young president determined to turn a page?”