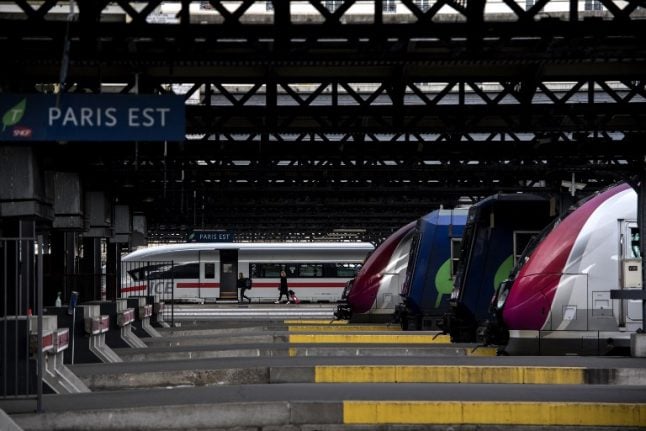 Commuters walk down a platform at the Saint-Lazare train station in Paris. Photo: AFP
French rail workers kicked off three months of rolling strikes Tuesday, part of a wave of industrial action that will test President Emmanuel Macron's resolve to reshape France with sweeping reforms.
The strike will cause chaos for France's 4.5 million daily train passengers, with stoppages planned two days out of five until June 28 unless Macron drops his bid to force a major overhaul at state rail operator SNCF.
But despite their frustration at the disruption to their journeys, many French rail passengers at Gare du Nord and Gare de l'Est in Paris, even those experiencing terrible delays, remained sympathetic to the striking cheminots (rail workers).
“I completely agree with the rail workers and the reasons behind what they're doing,” Hamet Sylla, whose train from Gare du Nord had been delayed for five hours, told The Local.
“It's absolutely vital to protect your rights and keep on fighting those trying to take them away. And the disruption to our day might be annoying but this is part of living in a society where you have the right to protect yourself.”
Become a member of The Local France for just €2.49 a month or €24.99 a year (Offer lasts until April 10th) Similarly, Monique Kibuku whose train from Gare du Nord had been delayed by seven hours, also felt that the rail workers should push back against the reforms.
“We all have to work but I understand that they have to protect what they have,” said Monique Kibuku.”They have to do what they have to do even if it's a disaster for us.
“To be honest, I knew it would be bad but I didn't think it would be like this. If I'd known I just wouldn't have bothered coming down here,” she added.
More and more in France appear to hold a similar outlook for despite the disruption an Ifop survey on Sunday showed sympathy growing for SNCF staff, with 46 percent backing the strike, up four points from two weeks ago.
READ ALSO: The crowd builds at the entrance to the Paris Metro at Gare du Nord. Photo: The Local
And others stressed the magnitude of the reforms Macron is trying to impose on the country's cheminots, which include an end to the special rail worker's status that includes a job for life, seven-hour days and generous pensions.
“I missed a meeting this morning because of the strike so I'm feeling a bit angry,” said Jean Beauvais. “But realistically, I know they can't just accept these reforms — they're so dramatic — I just wish this didn't have to mess up everyone else's day.”
And while others supported the strike, some were worried that things would get worse over the coming three months.
“I've been lucky today and my train should hopefully only be delayed by ten minutes. But even if it had been worse I would support the strike,” Philippe Llauze told The Local.
“It's normal to fight for your position and your rights as a worker. What else are they supposed to do? But I do worry about how bad it will get in the coming months,” he said, referring to the fact that the strikes are set to last until June.
Meanwhile others were divided over the strike, stressing that the rail workers already have a much better deal than other workers in France. Gare du Nord on Tuesday. Photo: AFP
“I'm split. I don't really agree with the strike but I feel sympathy for the rail workers,” Rachid, who didn't want to give his last name, told The Local. “On one hand the rail workers don't really have a choice — they have to go on strike to keep the rights they have now.
“But we also knew this [the reforms] were going to happen so it shouldn't come as a surprise. The French had a choice last year and they chose Macron.”
And perhaps unsurprisingly others were downright angry with the strikers, with some pointing out the frequency with which France's rail workers stage industrial action.
“They've been doing this for decades and I find it absolutely unacceptable,” Denise, who didn't want to give her last name told The Local. “They're not necessarily obliged to accept the reforms just like that but they can't keep taking everyone hostage like they have been.” Others, who had been trying to get to their destination since Monday night, were also struggling to muster any support.
“My train was cancelled yesterday so I got a train to Paris to stay with friends and I'm hoping to get a train back to Lille, where I live, today,” said Maggie Brosseaud.
“I don't agree with the strike in general. Rail workers have loads of advantages and while I understand that they have to fight for their rights, they already have three times as much as everyone else.”
And one woman simply said: “I'm too angry to talk about it because I'll be nasty. The strike means I'm not getting paid today.”