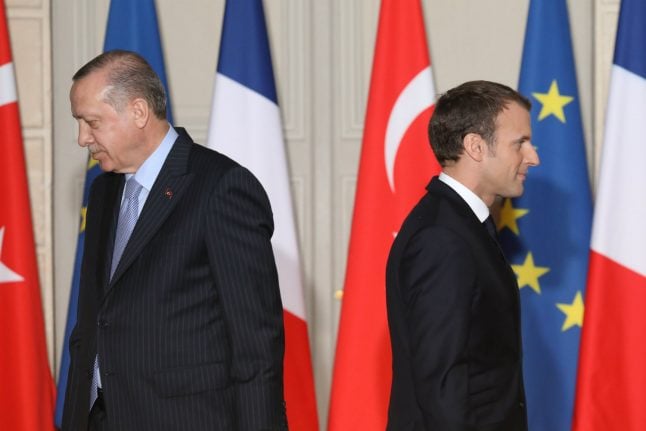 Temperatures were raised after President Emmanuel Macron on Thursday met a delegation of the Syrian Democratic Forces (SDF) made up of Kurdish and Arab fighters.

“If France takes any steps regarding its military presence in northern Syria, this would be an illegitimate step that would go against international law and in fact, it would be an invasion,” Turkish Defence Minister Nurettin Canikli said.

“Especially if they intend to support terror group elements or give direct or indirect protection with armed forces, this would be a really calamitous step,” he added during a visit to the northeastern province of Giresun.

Turkey itself sent troops into Syria and launched an operation against the Kurdish People's Protection Units (YPG) militia in its Afrin enclave on January 20th and drove out the group from the city on March 18th.

President Recep Tayyip Erdogan has repeatedly warned that Turkey could extend the offensive to Manbij, which is east of Afrin.

But Macron's office on Friday said Paris was not planning any new military operation on the ground in northern Syria outside the international coalition against the Islamic State extremist group.

Ankara views the YPG as a “terrorist” offshoot of the outlawed Kurdistan Workers' Party (PKK), which has waged an over three-decade insurgency in Turkey.

The PKK is blacklisted as a terror organisation by Turkey and its Western allies.

But the United States, as well as France, have worked closely with the YPG in the fight against Isis in Syria, much to Ankara's anger.

Erdogan on Friday criticised France's “wrong stance” and rejected Macron's offer of establishing a dialogue between Ankara and the SDF.

“We have no need for mediation,” Erdogan said. “You can sit down at the table with terror organisations but Turkey will continue its fight against terror.”

The NATO allies previously clashed over Macron's comments in late January when he said he would have a “real problem” with the Afrin offensive if it turned into an outright “invasion”.

But Erdogan at the time sought to reassure him, saying Turkey had no eye on Syrian territory.

On Saturday, Erdogan insisted during a speech in Istanbul that Turkey's action “was not an invasion, but to save the region from bloody gangs”.

He told France to look back at its own history, and made reference to Algeria and the 2011 Libya intervention which Erdogan described using the term “occupation”.

“How can you stand up and give us a lesson on civilisation? First look at your own history,” he thundered.