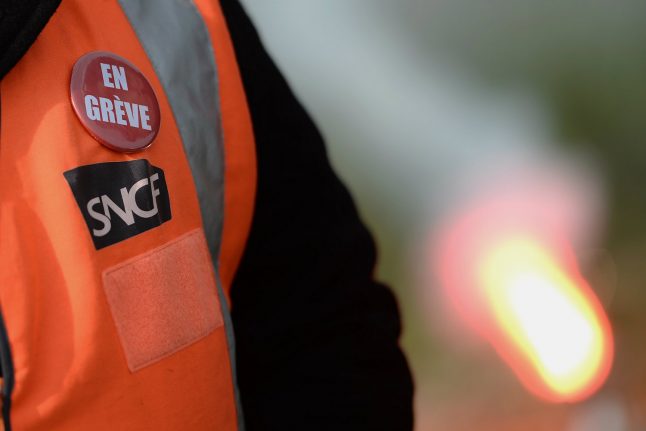 Workers at the state rail operator SNCF will start downing tools two days out of every five — a strategy aimed at limiting lost wages — but the disruptions are likely to spill over into non-strike days as well.

They are demanding that they keep their right to a job for life and early retirement, and opposing a corporate revamp seen as the first step toward privatisation.

French law requires a minimum service during strikes, but SNCF chief Guillaume Pepy warned in the Journal Du Dimanche Sunday paper that some lines could be closed altogether.

“There will be very few trains from the evening of April 2nd to the morning of April 5th,” said Pepy, who earlier warned that just “one train in five or one in eight” would be running.

“I frankly deplore this strike which is very punitive for the travelling public.” she said.

Rail workers will be joined by striking rubbish collectors in Paris and other major cities who demand the creation of a national waste service as well as the right to early retirement.

Electricity and gas employees will also launch strike action, though it was unclear what the consequences might be for their customers.

The protests, which the SNCF has vowed to pursue for three months, follow a series of one-day strikes against Macron's multi-front reform drive.

Unions have so far failed to block any of the shake-ups made by the centrist leader since his election last year, a victory that virtually swept away the Socialist Party, long their political champion.

But by taking on the SNCF, a totem of French unionism, Macron has inevitably drawn comparisons to a previous turning point in Europe's industrial relations: Margaret Thatcher's showdown with British coal miners in 1984.

Macron may also be taking a page from former German chancellor Gerhard Schröder, who overruled opponents in his own leftist party in the early 2000s to enact labour and welfare reforms that set the stage for an economic rebound.

Yet Macron is also seizing his own particularly French moment, promising to push through the SNCF overhaul by decree before summer.

“His tactical approach is working. By constantly opening new fronts, he renders opposition to the previous one obsolete,” said political expert Philippe Braud.

With French opinion divided between “resignation” and “deep conviction that things must move forward,” Braud said, “the planets were aligned: So many reforms have been aborted over the past 20 years”.

But France's union landscape has shifted markedly, with the hard-line CGT recently dethroned as the biggest player by the more moderate CFDT, which has refused calls for a “convergence” of the various protests.

Membership has also plummeted in line with the decline in heavy industry, with just over 11 percent of French workers unionised according to the Organization for Economic Cooperation and Development, one of the lowest levels in the EU.

Unions have nonetheless continued to punch above their weight, and even the CFDT chief Laurent Berger has warned Macron against “knocking over everything”, describing his method as “You discuss, I decide”.

For Braud, that decisiveness is exactly why Macron “has a good chance of succeeding with a new wave of reforms” despite weeks of protests that could spell misery for millions of commuters.

Fresh on the heels of pushing through controversial relaxations of France's strict labour rules, Macron appears eager to take advantage of his momentum.

He is also a “smart communicator” who has orchestrated “a semantic shift: reform is presented as modern,” said Isabelle Clavel, a historian at Montaigne University in Bordeaux.

Macron's path has also been cleared by the “collapse of traditional parties” and his emergence as “a sort of political UFO” capable of convincing voters that his reforms will pay off.

Before that happens, however, Macron will face off with unions anxious to show they won't be pushed to the sidelines.

CGT head Philippe Martinez, whose union is the biggest at the SNCF, said this week that France was poised for another May 1968, when a series of strikes snowballed into a social revolution.

Fifty years ago, “There was no general call for a strike, but a chain reaction of mobilisations that came together,” Martinez told L'Humanite newspaper.

READ ALSO: French strikes: The days to avoid train and plane travel in France in April