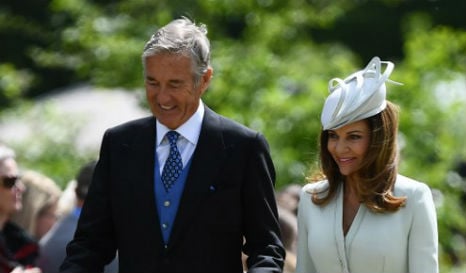 David and Jane Matthews, attend the wedding of Pippa Middleton and their son James at St Mark's Church in Englefield, west of London. Justin Tallis/Pool/AFP
David Matthews was taken into custody for questioning last Tuesday by investigators with France's Brigade for the Protection of Minors in a case dating from 1998-99, after a complaint was lodged in 2017, the source said.
A spokesperson for the Matthews family, quoted by Britain's Daily Mail online, said: “David Matthews categorically denies the allegation and unequivocally contests the untrue and scandalous accusation”.
His daughter-in-law Pippa Middleton married financier James Matthews last May, after shooting into the spotlight in 2011 following the wedding of her sister Kate to Prince William, the second-in-line to the throne.
David Matthews was born in Rotherham, England, and began his career selling cars before becoming a professional racing driver.
After a severe crash during a race, he turned to business, building a successful chain of dealerships before selling and becoming a property developer.
Matthews owns the Eden Rock luxury resort on the Caribbean island of St Barths, and the Glen Affric Estate in Scotland.