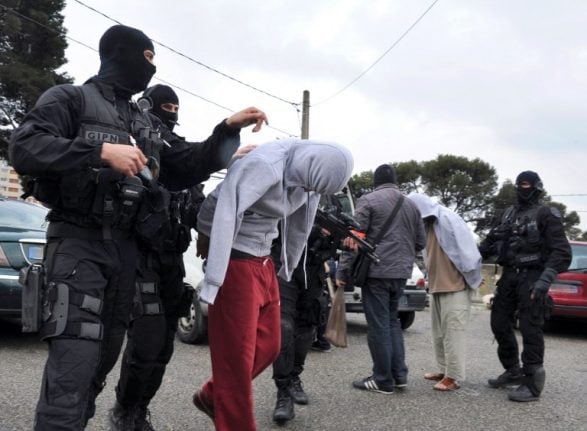 Radical Islamists are arrested by police in southern France in 2012. Photo: AFP
In the wake of Friday's shootings by Radouane Lakdim, officials disclosed his links starting in 2013 with “the Salafist movement”, a Sunni Muslim branch originating in Saudi Arabia which promotes a strict conservative lifestyle.
While a majority of Salafists disdain violence as they adher to the fundamentalist traditions of “pious ancestors”, some of its followers embrace using force to promote their beliefs.
“It is not only the terrorist organizations, the armies of Daesh, the imams of hate and death that we are fighting against,” said French President Emmanuel Macron on Wednesday.
“What we are fighting against is also this underground Islamism … which indoctrinates on our soil and corrupts daily,” he said, denouncing this “insidious enemy that requires every citizen to be vigilant and civic-minded.”
Former Socialist prime minister Manuel Valls also addressed the issue in a radio interview Tuesday.
“It's not about forbidding a religion or even an idea, but I'm saying very clearly that we must forbid the spread of Salafism, because it's the enemy.”
“Of course not all Salafists are terrorists, but all the terrorists are Salafists,” he said.
Many of the jihadist attackers who have struck France since the January 2015 massacre at the Charlie Hebdo newspaper in Paris were later found to have frequented Salafist circles.
READ ALSO: Legal experts almost unanimously dismiss the idea of a ban, saying any effort to outlaw a religious movement would run counter to freedom of belief and never hold up in court.

Other critics say such moves would only drive extremist preachings underground, making it harder for authorities to monitor young people at risk of falling under the Salafists' sway.
But outrage over the killing of Arnaud Beltrame, the French officer whose throat was slit by Lakdim after taking the place of a hostage, and three other people could put new pressure on President Emmanuel Macron to take more aggressive measures.
Some lawmakers have also renewed calls for “preventive detention” of the most radicalised Islamists already on watchlists, after it emerged Tuesday that Lakdim had been on the lists and was summoned for an interview with the authorities days before his attacks in southern France.
“Our country must launch an extensive campaign to eradicate Salafism,” the rightwing Figaro daily wrote in a front-page editorial Tuesday.
“With all due respect for the apostles of 'living in harmony', this virus is incompatible with our freedom to live, move and think.”
Foreign financing
Macron, who pledged in January a “restructuring of Islam in France”, had already signalled his determination to clamp down on Salafist mosques and imams.
Confronted in 2016 by a Montpellier resident who said “a Salafist is a citizen like any other”, he replied: “There are associations which do not respect the laws of the republic in the name of their religion, these I want to dismantle.”
Yet France has already passed several laws since 2012 aimed at curtailing extremism, most recently last year's tough anti-terror laws which enshrined many measures of the state of emergency imposed after the November 2015 attacks in Paris which killed 130 people. The government estimates there are about 2,500 mosques and prayer halls in France, about 120 of which are considered to be preaching radical Salafism.
Authorities have shut down some of them, most recently in December in Marseille, where the Algerian imam El Hadi Doudi was accused of distributing texts liable to incite hatred.
Police said several people who attended his As-Sounna mosque had claimed allegiance to Al-Qaeda or had fought in Iraq and Syria, and this month officials confirmed that Doudi would be deported.
Far-right leader Marine Le Pen on Monday reiterated her calls to block foreign financing of mosques — a reference to the funds provided by Saudi Arabia for Salafist mosques around the world.
But Prime Minister Edouard Philippe appeared to pour cold water on the idea of outlawing Salafism outright, though he admitted “a real question about the combat of civilisations” was posing a threat to French values.
“We cannot prohibit an idea,” Philippe told parliament on Tuesday.
“We can punish the behaviour it provokes, if it disrupts the public order, the country's laws or the minimum standards of social life,” Philippe said, garnering widespread applause from lawmakers.”