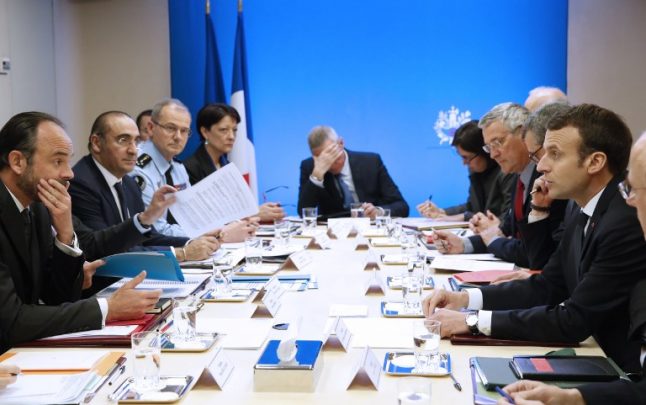 France's interior ministry compiles something known as the “S file” (the “S” stands for security) which contains anyone suspected of being a radical, including potentially dangerous leftist and far-right activists.

There is also a separate list, the File for the Prevention of Terrorist Radicalisation (FSPRT), for people judged to be terror threats.

Radouane Lakdim, the gunman involved in last Friday's shooting spree in the southern French towns of Carcassonne and Trebes, was listed in the S File in May 2014 and the FSPRT in September 2015.

How many are flagged as a threat?

The file includes people who represent varying degrees of threat, from someone who is reported by his boss for not shaking hands with women to a minor who has recently converted to Islam.

But there are more serious cases of people in contact with members of the Islamic State (IS) group, or others who have left for or wanted to travel to areas controlled by IS in Iraq or Syria.

Once listed, a person will remain on the list for five years but might not be actively monitored. The file also contains records of potential links between suspects.

It updates gradually, as cases are reported by the security services or via calls to the toll-free tipline that launched in April 2014

Most suspects are from four regions in France: the region around Paris known as the Ile-de-France, the area around Lyon known as Auvergne-Rhone-Alpes in the east, the southern Languedoc-Roussillon-Midi-Pyrenees region and the Provence-Alpes-Cote d'Azur in the southeast.

People from most socio-professional categories appear in the files, but the majority are young men from the suburbs around French cities where low-income immigrant communities, many from Muslim countries, are concentrated.

“You have to remember that this is just the tip of the iceberg,” said Jean-Charles Brisard, president of the Center for Terrorism Analysis (CAT).

“Since 2014, 60 percent of the attacks in France were carried out by people who weren't in the file. The files are good, but even they don't show the full scale of homegrown threats.”

How are suspects tracked?

French security services manage the list of suspected extremists. Individuals on it are ranked by descending threat level.

The names at the high end of the spectrum are put under closer surveillance and brought in for questioning at the slightest suggestion they might be considering action.

But security experts have warned for years that France does not have the resources needed to put all of its suspected jihadists under round-the-clock surveillance. Following one suspect full-time can take around 20 police officers, experts say.

Investigators therefore depend on phone or internet interceptions to keep track of the highest risks.

“It keeps me up at night,” an anti-terrorist officer told AFP, “not having the right people at the top of the list and getting surprised by a kid we misjudged.”

The question of how France can keep tabs on the thousands of individuals flagged up as Fiche S has not seem to have been resolved since France's recent spate of terror attacks began in January 2015, despite being raised after each attack.

While some on the far right call for them to be expelled, others on the right, notably leader of the Republicans party Laurent Wauquiez has demanded internment.

Some right wing MPs have called a Guantanamo Bay-style prison to be opened on a French island to house all radicalized individuals.

Others accept that French intelligence services simply don't have the resources to be able to keep tabs on all radicalized individuals.

“We do not have enough police to be able to follow each of radicalized individual because there are much more serious cases that take priority,” said centrist senator Nathalie Goulet.

But just like his predecessors President Emmanuel Macron is under pressure to respond.