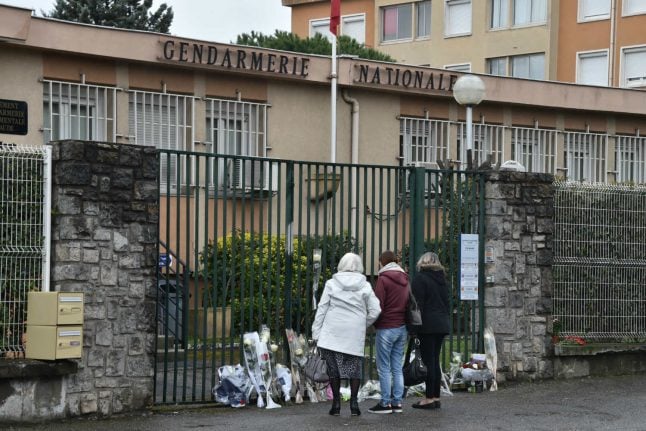 People stand next to flowers laid in front of the Gendarmerie Nationale in Carcassonne on March 24th. Photo: AFP

The first victim of gunman Radouane Lakdim was the passenger of the car he hijacked in the medieval town of Carcassonne, retired winemaker Jean Mazieres.

In his sixties, the married father-of-one had retired two years ago and delighted in playing an active local role, notably through a committee to organise village fetes.

“He was very jolly — he loved life, he loved parties,” said Marc Rofes, the mayor of nearby Villedubert where Mazieres and his family had lived for four generations.

“We have lost someone who was liked by everybody,” Rofes said.

“He was really in the wrong place at the wrong time. A tragic fate.”

Lakdim also shot the driver of the car, a Portuguese national who remains in a critical condition.

After stealing the car and shooting and wounding a police officer who was out jogging, Lakdim drove to the Super U supermarket in the nearby town of Trebes.

He shot the store's chief butcher Christian Medves in the head, according to a colleague who gave his name as Jacky.

“We still don't know what happened, but knowing Christian, I imagine he would have wanted to intervene,” said Franck Alberti, Medves' friend for the past 45 years.

“He was a good guy, a brave and dignified guy,” Alberti told regional newspaper l'Independant.

Medves, a married father of two daughters, had just celebrated his 50th birthday and became a grandfather a year ago.

Friends said he was an accomplished sportsman and a jovial figure, who loved a good bottle of wine and partying with friends late into the night.

Lakdim also gunned down a customer at the butcher's counter: 65-year-old Herve Sosna, a retired builder.

“He never wanted to leave Trebes, so he went into building work,” said Durand, who saw his brother every day.

Sosna went to the supermarket twice a week.

“He never asked for anything, and he was killed, just like that,” his brother said.

Lieutenant-Colonel Arnaud Beltrame, deputy chief of the regional force of gendarmes, has been hailed a hero for taking the place of a woman at the supermarket whom Lakdim was using as a human shield.

He hoped to be able to negotiate once all the shoppers and staff had been taken to safety, but Lakdim shot and stabbed him.

President Emmanuel Macron led tributes to an officer who “displayed exceptional calm in the heat of the moment”.

His family say they were not surprised that Beltrame would put the lives of others before his own.

“He was always like that — he's someone who ever since he was born did everything for his country,” his mother, who has not been named, told RTL radio.

Beltrame's brother Cedric said he would have known all too well the risk he was taking.